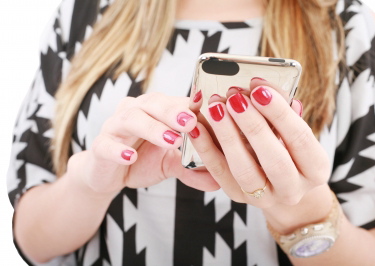 Have you ever had one of those moments where you wish you could rewind the time and do things differently?

I had one of those moments several weeks ago. I was running late and needed to grab a quick birthday present for my little sister. I zoomed to Old Navy and found a few cute shirts for her and then hurried home to get to the party on time.

I set my bags down and reached into my purse to grab my phone.

I ran outside and checked in the car, but it wasn’t there either. I had a sinking feeling in my stomach. I must have left it at the store.

My fears had come true – my phone was still inside Old Navy.

Thankfully, with modern technology I was able to log in online to a program called Find My iPhone and find its exact location. My fears had come true – my phone was still inside Old Navy. I immediately called the store.

After six minutes of being on hold, they returned only to tell me that nobody had turned in a lost iPhone 5. I went back to the store to check for myself, knowing it was probably in somebodies pocket by now.

To make a long story short, I never found my iPhone again.

It had most likely been stolen. I left Old Navy with a knot in my stomach.

To be honest, I’m normally not the kind of person who gets attached to my electronics. If something breaks, or gets lost, I don’t usually cry about it. This time, something was different. It felt like a part of ME had been stolen.

I felt so lost without having instant access to my phone, my apps, my photos, my music, etc. For the first time, I realized how incredibly dependent and attached I had become to my iPhone.

Over the next two days, I learned what was it was like to live without a cell phone (I know that sounds like a short amount of time, but to me, it felt like forever).

Instead of turning to my phone for a quick text, I had to figure out a different way to communicate. Instead of looking through my apps when I had a spare second, I was forced to sit there quietly.

Without my phone, I had no other choice but to be still and silent a lot more than I was used to. During my many moments of quietness, God began opening my eyes to some issues I had in my heart. He began showing me areas of my life that were consumed with electronics.

Instead of engaging in meaningful conversations with actual people, I would often turn to my phone.

Instead of using my time wisely, I would waste valuable minutes doing something pointless on my phone. Instead of having a focused Bible and prayer time, I would get easily distracted by the buzz of my phone. I slowly realized that I had become a slave to the demands of my phone.

I realized that my phone had taken priority in my life over family, friends, and even God at times.

My phone was becoming an idol to me – something I felt like I couldn’t live without.

Not sure if your phone is an idol? Take the test below.

Your phone is most likely an idol if…

I want to challenge you to seriously consider the 10 scenarios from above.

How did you measure up? How much of an idol has your phone become? Be honest!

I want to challenge you to take some time to pray and ask God to show you any blind spots in your own heart. Having a phone is a very handy thing, we just need to make sure it stays in its proper place.

One thing that helps me keep my phone under control is by limiting the rooms and times that I will use it in.

Zack and I have a “no using phones in our bedroom” policy. That rule helps both of us stay focused on each other when we’re at home instead of zoning out with our phones. I have also made it a habit to never allow my phone to interrupt a face to face conversation when I’m with a real person.

If I’m talking to someone in person and a text or call comes in, I ignore it until I’m finished talking. It helps me stay focused on the conversation and makes the person I’m talking to feel valuable and important.

What are some practical ways you can take control of your cell phone usage?

What kinds of things could you do to make sure your phone doesn’t become/remain an idol in your life? Share your ideas in the comment section below! I love hearing from you.