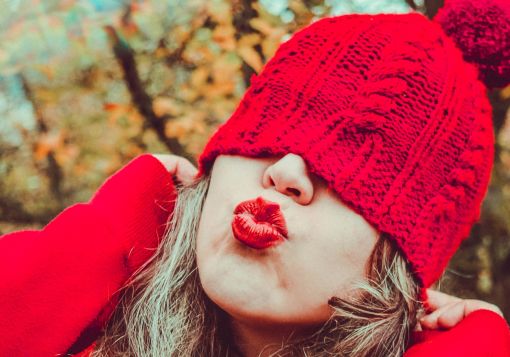 Let’s have a candid conversation about flirting. I want to share with you a few things that I wish someone would have shared with me back in high school. Looking back, I now realize how selfish and self-promoting my motives were. I wouldn’t have called myself a flirt, but I definitely was.

It’s so obvious to me now.

Yeah, my mom tried to tell me, but I didn’t really care. I needed an older girl (someone just a few years ahead of me) to look me in the eyes and be honest with me about my actions. That never happened though. It wasn’t until after years of flirting and teasing many different guys’s hearts that I finally realized how selfish and unkind my actions truly were.

Right now, my goal is to be that older girl in your life. To tell you the hard truths about flirting that you don’t want to hear (but really need to). I’m sharing this with you because I love you and care about you.

“Flirting isn’t a problem. People need to calm down.”

Flirting according to the dictionary is defined in these ways:

“Behave as though attracted to or trying to attract someone, but for amusement rather than with serious intentions.”

“Experiment with or show a superficial interest in (an idea, activity, or movement) without committing oneself to it seriously.”

“To behave as if sexually attracted to someone, although not seriously.”

Flirting is something we do to grab attention, to get a guy to notice us, to toy with someone’s heart, to get something we want out of someone, to boost our own ego, and/or as a way to compete with other girls. There are more reasons, but those are a few I personally was guilty of myself.

I love this quote from an article at setapartgirl.com.

“When you send flirtatious texts, participate in playful physical interaction with boys, or post inappropriate pictures of yourself on Facebook [or other social media platforms], your desire for attention takes higher priority than the glory of Christ or the purity of young men. You are placing your need for approval above the command of purity. Flirting is rooted in selfishness, and entirely without the humility that we are called to walk with. A flirtatious attitude screams: ”me, me, me!” and “take, take, take!” while Christ’s love says “others” and “give.”

The article goes on to say,

“Our desire and motive for what we say and do around guys should be for their attention to be directed to Jesus, not to us. We should never distract them from pursuing the Lord, but rather spur them on toward Him. This is a good gauge for testing the purity of our actions and words.”

Such great insight and wisdom on the topic of flirting. To help us further unpack this topic, I’m sharing with you 5 Hard Truths about Flirting.

1. The Bible Doesn’t Give Room for Flirting

If we take an honest look at the Bible, we won’t find any passages that condone flirting amongst single people. Even when it comes to marriage, flirting shouldn’t be done in a way that is deceptive or selfish, but to give, love, and serve. If a married woman is sexually enticing her husband, it should be out of a genuine heart to love him.

In the Bible, I see God make very clear distinctions between a wise woman and a wild woman.

2. Flirting is Motivated by Pride and Selfishness

I see so many single girls flirting with guys and I see so much of myself in them. When I hear their reasoning for why flirting is okay, I just want to say some hard truths, “sister, be honest with yourself. You’re flirting for you. You like you. Quit playing this silly game and acting like you’re looking out for his best interest. You’re not.” If we’re truly honest about flirting, self is the center of it all. God never condones selfishness, self-promoting, or anything along those lines. We are called to reflect Him and point others to Him. Not to ourselves.

3. Flirting Doesn’t Give You What You Truly Want

What is at the core of a flirtatious act? Is it the desire to be valued? To feel beautiful? To make someone jealous? To boost your own image? To get a certain guy to notice you? To feel worthy? To feel loved? Whatever the reason, flirting will never give you what you truly want. It can’t. Even if you get the guy’s attention, it won’t last. Even if you make another girl jealous for a moment, that will soon wear off. Even if you feel pretty, you’ll soon need more attention to make you feel pretty again.

God did not design us to find our satisfaction in anyone other than Himself. He is the only one who can totally and completely satisfy you. He alone should satisfy you.

When you dig a little deeper, this reasoning makes no sense. Flirting is very short-sighted. It’s about what I want when I want it, and how I want it. I’d love to hear a Christian girl make a legit argument against that. 😉

You can begin practicing for a strong, vibrant, and healthy relationship by doing everything in your life for God’s glory. Flirting may feel good now, but it’s terrible practice for a thriving marriage. Do yourself and others a favor now and start treating the guys around you with a selfless, others-focused, type of love. Treat others with their best interest in mind. Ask God to help you keep Him at the center of your motivations.

Okay, girl. That’s it for now.

Like I said earlier, I share these hard truths because I love you and care about you. I want you to hear what I wished someone has shared with me at 16 years old.

I am so curious to hear what you think about this topic. Please leave me a comment below and let me know your thoughts on flirting. For it? Against it? What do you see in the Bible? Share your thoughts below and let’s get discussing!