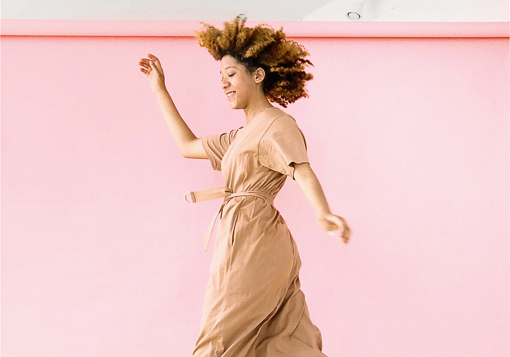 This is false. Very false.

Just look at some of the godly women in the Bible. Esther was a strong and courageous woman (Esther 1-5). Or how about Abigail (1 Samuel 25)? That girl was brave. Just look at Mary the virgin mother of Jesus (Luke 1-2). That girl had courage. The godly women of the Bible do not portray a picture of weak and wimpy womanhood.

There are many strong, brave, and courageous women in our modern culture, but sadly, most of them are fighting against God’s design, not for it.

It’s time for us to get strong — the right kind of strong.

It’s time we, as Christian girls and women, got a little fire in our bones for the things that truly matter. The things that matter to God. We serve a mighty King who is passionate about things like truth, life, marriage, purity, holiness, womanhood, manhood, and much more. With attitudes of reverence, respect, and humility, we should be on the front lines fighting for God’s design and purposes.

I would LOVE to see thousands of brave, strong, and courageous Christian women rise up from our generation.

Our culture is in desperate need of godly women with passion and fire for God’s truth.

May our response be like the apostle Paul in Romans 8:31, “What then shall we say to these things? If God is for us, who can be against us?” If you desire to become a strong and brave girl for God’s glory, you can start pursuing that right now! In fact, to help you get started, I came up with 7 habits that you can put into action right away.

I call these the 7 Habits of Strong and Brave Christian Women. Are you ready? Let’s dive in!

Habit #1: She is a God-Defined Girl

She doesn’t allow the culture to define her worth, identity and value as a girl. She looks to God’s word for truth (Psalm 119:1-8). She understands that she is made in His image and handcrafted to look exactly the way she does.

She looks to God’s word for answers about her design and purpose as a female. She embraces God’s good design for gender roles and strives to live those out in her life. She is a girl who constantly strives to be defined by God’s word and nothing else.

Girls who are strong for Christ become strong by realizing how absolutely weak they are. They understand that without Christ’s help, they are doomed to failure. Rather than getting caught up in the battles of the “flesh,” these girls take the battle to the Lord in prayer (Colossians 4:2).

They get on their knees and pray like it really matters. They fight the battles of this world by seeking the face of the God of the universe. They pray with expectant anticipation for God to work. They believe prayer changes people, so they take it seriously.

Habit #3: She Searches for Truth

This habit is crucial. Rather than “hoping” to make the right decisions in life, this girl searches for God’s truths (Proverbs 2:3-5). She is on a constant treasure hunt for God’s design and purpose in her life. Whether it’s guys, romance, her future plans, or how to love her siblings, she scours God’s Word for answers to her questions.

She reads solid Christian books (like this one and this one), in search for Biblical truths. The more truth her brain is filled with, the less confusing life becomes. She makes wise decisions and becomes passionate about God’s truth.

Habit #4: She Looks for Lies

Not only does a brave, strong, and courageous girl search for truth, she is also on the constant lookout for lies. She knows that her three greatest enemies are her flesh, the world, and the devil (1 Peter 5:8, James 1:14-15), so she keeps a careful watch for lies. She doesn’t blindly engage in entertainment, but rather carefully examines the content and worldview. She’s on the constant lookout for lies about her design as a girl, lies about God, and lies about her worth.

A strong girl knows the danger of flirting with temptation and does all she can to avoid it and fight it. She knows how evil and seductive our world is, so she prepares ahead of time for the battle (Galatians 5:17). She doesn’t rely on her own strength but stays plugged into the source of strength (Christ) by building a daily relationship with Him.

She firmly and boldly says no to sexual pressure, compromise, lies, and even half-truths. She doesn’t buy into the popular lies of our culture regarding things like abortion, sexual promiscuity, radical feminism, and the redefining of marriage.

Habit #6: She Says YES to Righteousness

This girl loves God’s heart for righteousness and holiness and strives to live according to His word (1 Peter 1:16). She understands that being holy means being “set-apart” from the culture. Rather than following the popular trends and worldviews of the day, she chooses to put her hope and trust in the Word of God. She prays and asks God to make her more like Himself in character, thoughts, actions, and words.

Habit #7: She Does Hard Things

The final habit of a brave, strong, and courageous girl is clearly seen through her actions. She isn’t afraid to do hard things for the sake of Christ. Whether it’s sharing the gospel with someone, leading a girl’s Bible study, mentoring a younger girl, getting involved in the pro-life movement, ministering to her own family, or many other things, her life is marked by her hard work for Christ.

7 habits of string and brave Christian women. I pray you’ll join the ranks of passionate women living all-out for Christ in our generation. Becoming this type of woman is a life-long pursuit (I’m still on the journey!), but it’s one that will end with our Savior telling us, “Well done, my good and faithful servant” (Matthew 25:23). And there’s no better ending than that.

Let’s chat about it…