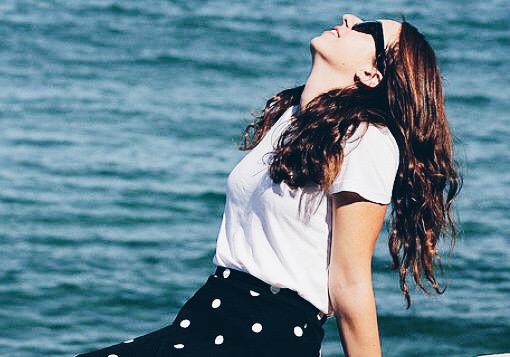 My eyes grew twice the size as I watched my swim coach pull my new bathing suit from the box.

“Ummm are you sure that’s her bathing suit? It looks a little small.” My mom asked with a questioning voice.

My swim coach chuckled a little and then replied, “I’m positive this is her bathing suit. We order them extra small so that they will fit tight. We don’t want anything slowing her down when she’s in the water.”

With hesitation my mom paid for the swimsuit and then handed it to me. I was only ten years old when this bathing suit fiasco went down, but I remember that conversation like it was yesterday.

I remember thinking in my little girl brain, “This bathing suit is way too small. It’s going to be tighter than skin tight.”

Small Bathing Suits Were Only the Beginning

When the next swim season rolled around my parents decided to focus my attention in a new direction. They decided that the modesty standards they were holding for our family and the competitive swim world didn’t go hand-in-hand.

They willingly sacrificed swim team so they could remain consistent in the their personal convictions.

Little did they know that that small decision to give up swim team was a milestone in my Christian life.

I learned a valuable lesson through that experience. I learned that being a Christian takes courage and sacrifice.

It takes courage to stand up for what you believe is right, and it takes sacrifice to give up activities, sports, parties, events etc. that don’t align with personal convictions.

Courage and Sacrifice Even When it’s Hard

Now that I’m in my late twenties I’ve realized that being a Christian woman in the 21st century takes serious courage and sacrifice.

There have been countless times in my life where I’ve had to courageously stand up for what I believe and willingly sacrifice something fun in order to hold to my personal convictions and standards.

I remember a time when I had to sacrifice hanging with my friends at the movie theater because the movie didn’t line up with my convictions.

I remember a time when I left the rodeo early because the concert afterward had a singer that I knew was going to have some sketchy songs.

I remember a time when I sacrificed a relationship with a guy because the wise people around me counseled against it.

Those are just some examples of the types of things I’ve sacrificed in order to hold on to my convictions and do my best to honor God with my life.

Being a Christian Girl isn’t Easy

Many of your girls have emailed us or commented on posts asking about specific circumstances in your life. You want to know if you should give things up that don’t line up with your personal understanding of God’s Word.

One of the biggest questions we’ve received is this, “should I give up this sport (swimming, gymnastics, dancing, volleyball etc) if it doesn’t line up with my modesty standards?”

I’ve somewhat avoided this topic because it’s a hard one. The answer isn’t popular and, to many, it may seem extreme.

I personally believe that we as Christian girls should courageously sacrifice anything that doesn’t line up with our convictions and doesn’t help us honor God with our lives.

For me that meant avoiding sports that required a uniform that went against my modesty convictions. I chose to instead pursue sports that allowed me to play competitively while not compromising.

I guess that’s one reason I ended up in basketball. Being tall helped, but the modest uniforms were a big draw as well.

Courage in Every Area of your Life

I’m sure many of you have experienced or understand exactly what I’m talking about. It’s probably something different for each one of you.

Whatever the situation is I want you to ask yourself these two questions:

Let’s Wrap it Up

Is there something in your life that God may be asking you to give up in order to honor Him?

Have you ever had to give something up in the past? If so, what was it?