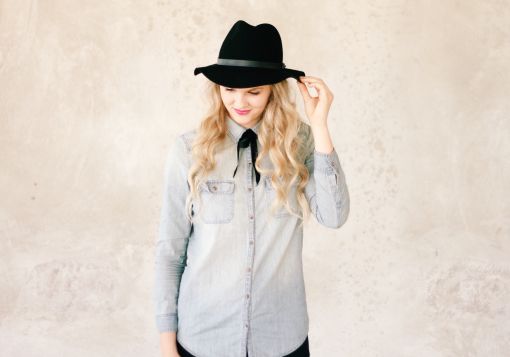 I liked most everything about my physical appearance…except for this one thing. My nose.

I sat in front of the mirror for 30 minutes one time staring at my face, wishing I had a different nose. I would pinch it to make it look more slender, questioning why God didn’t make that one easy adjustment.

I was 16 years old and had unknowingly bought into many lies about my physical appearance and beauty. I wasn’t the only one either. Every female friend I had was discontent about something on her body too.

It wasn’t until several years later that God really opened my eyes to the root of my insecurity.

At the heart of my problem wasn’t a “bad nose,” but an ungrateful heart to the Creator and designer of my body. I was so focused on me (the creature), I forgot to acknowledge the Creator Himself (Romans 1:25).

My eyes were slowly opened to the many subtle lies I had been believing about my identity as a woman. Even though I was a Christian girl, I realized that I had allowed other things to define my womanhood outside of God’s Word.

I didn’t want that to be the pattern for my life any longer.

I made the choice that God’s Word would be THE foundational source for my definition of womanhood.

God would be the only One who would define my femininity. It would no longer matter what Hollywood said, what the chick-flicks promoted, what Nashville produced, what the magazine displayed, or what female professors taught – God’s Word would now be the sole foundation for my identity as a woman.

That was a brave choice.

That choice landed me on the most counter cultural yet totally fulfilling swim of my life. Over the next few years, I devoured many books on the topic of biblical womanhood and studied everything the Bible taught for women (i.e. Prov. 31, Titus 2, 1 Tim. 2:9, etc). I wanted to know what God’s design was for my life.

And you know what? The more I understood and embraced God’s design for womanhood, the more happier, joy-filled, and content I became.

That one brave choice has lead me on a journey to experiencing God’s transforming peace (Isaiah 26:3). The more I define my beauty, worth, identity, and femininity according to God’s word, the more content I become.

In our (Bethany’s and mine) brand new book, Girl Defined: God’s Radical Design for Beauty, Femininity, and Identity, we show you exactly how to do just that! If this post has sparked an interest in you to learn more about God’s amazing design for womanhood, I can’t encourage you enough to grab a copy.

We’ve also written an entire chapter on showing you how to be a brave girl for God in this modern culture. In chapter 11 we’ll take you through an easy-to-understand acrostic on the word BRAVE, and show you how to live out God’s design in practical and courageous ways. This is the book I would have devoured as a young Christian woman.

We’ll also be hosting an 8 week LIVE webinar study this summer starting the first Wednesday in June. We will be studying biblical womanhood and using Girl Defined as a guide. This study is totally free, but spots are limited, so register soon if you’re interested.

In closing, I want to leave you with this challenge:

“God is looking for women who will be brave in today’s society. We’re challenging you to be one of those women. To be one of the few who are willing to liberate yourself from the commonality of wimpy womanhood. Our generation is in need of Christian women who are willing to rise up and show the culture the powerful influence a God-defined woman can have.” -Girl Defined

Will you be a brave woman? Let’s chat some more in the comment section below!