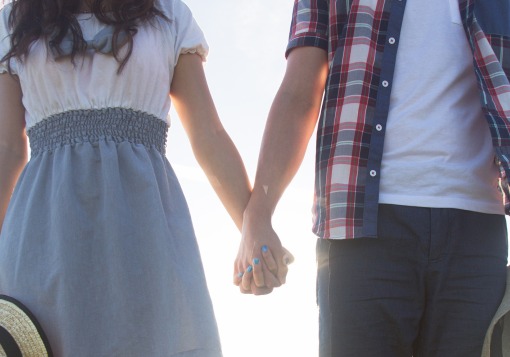 “So..hey…can I have your phone number?” He asked me smoothly. I pretended not to notice his chuckling friends in the background.

There was no way in the world I was giving this guy my phone number. For one, I just met him. Two, I was only sixteen. Three, he wasn’t the type of guy I wanted to stay in “touch” with anyways. If you catch my drift.

So, I did what any good Christian girl would do. I decided to play a little joke on him.

“Yeah…I’ll give you my phone number” I replied. “But you’ll have to ask my dad for it.”

Okay – the chances of this guy asking my dad were slim to none. Right? What sixteen year old guy would do that?

“Okay. Sure!” He responded quickly.

“Where’s your dad?” He asked looking around the basketball gym.

“Ummmm…” I said hesitantly. “He’s…ummm…oh, right over there. The tall guy with a black beard.”

I watched with wide eyes as this brave young whippersnapper ran over to my dad.

I couldn’t hear what they were saying, but I knew what the results were when the guy never came and talked to me again that night.

I know, I know. That wasn’t a very nice joke to play. I wouldn’t do it again. Most likely.

Although that situation didn’t go anywhere, there would come a point in my life when a guy named Zack Clark would ask my dad a similar question. That time the answer would be yes. Next followed, what I call, the “relationship stage.” Nine months later we got engaged. Eight months later we were married.

If you’re a single girl and hope to get married someday too, you have to go through the “relationship” stage at some point in your life as well. You have to go from being single, to being in a relationship, to getting engaged, to walking down the aisle.

Some people choose the modern dating path to get there. Some choose the old fashioned courtship path. And others choose, what I like to call, the “dateship” path – a combination of both dating and courtship.

Before you meet prince charming, you need to have a good understanding of which “relationship” path you will choose and why. No path is perfect, but you’ll be a lot more successful if you have a well thought out, Christ-focused plan before you get there.

In this post, I want to break down the pros and cons of each “path” and share what I did in my relationship with Zack and why.

Modern dating is the most common path for relationships today. It has its origins with the sexual revolution of the 1960s. It’s brand new yet it’s the only path most people know of.

In modern dating there is little to no accountability from family, friends, or mentors. The couple spends a lot of time alone, often in intimate settings. The motives for casual dating are typically self-serving and tend to include heavy doses of physical intimacy.

As Scott Croft from Boundless describes it, “Modern dating philosophy assumes that there will be several intimate romantic relationships in a person’s life before marriage. In fact, it advocates ‘playing the field’ in order to determine ‘what one wants’ in a mate.”

If I asked you what your favorite drink was and you said soda, what would my next question be? What kind of soda?! There are hundreds of flavors out there! Courtship is the same way. Ask ten different people what their definition of courtship is and you will get ten different answers.

Most courtships share some common principles, but beyond that it’s a deck of cards. Some versions I agree with, others I don’t. To spare you from a twenty page list of various courtship versions, let’s just stick with a basic definition for now.

A lot of people would agree that courtship could be described like this: A relationship between a guy and a girl for the purpose of seeking God’s will on whether or not they should marry each other. Under the protection, guidance, and blessing of parents or mentors, the couple focuses on building a deep friendship that could lead to marriage.

Most often the guy speaks to the girl’s dad or authority figure first about pursuing a relationship with her. If the dad gives him the green light, he begins building an intentional relationship with the daughter under the counsel and oversight of the dad. The couple spends most of their time in groups and does very little alone. Physical touch is usually completely off limits.

Again, depending on who you’re talking to this could look like a million different things.

Like I said before, dateship is the combination of courtship and dating. I coined this phrase (or so I thought…till I googled it) for the purpose of describing a relationship “path” that I see most often in my circle of friends. Instead of adopting or rejecting all of the principles of dating or courting, it’s a combination path, hoping to gain the best of both worlds.

In dateship, the guy still approaches the dad (or pastor/mentor if she doesn’t have a dad) the old fashion way explaining his interest in the daughter. Once he receives the green light from the dad, the couple would spend time together for the purpose of building a deeper relationship with marriage being the end goal. They will still have accountability from those around them. Their activities will consist of group time and alone time in appropriate locations (no dark rooms at 2am).

They will go on occasional “dates” to restaurants, bowling, coffee shops and other public places. Physical intimacy will remain at bay until marriage, but the dateship couple might hold hands, sit close, etc. once things get more serious.

Three different paths for pursuing relationships. Of course I only scratched the surface of their definitions and variations. So please forgive me if I missed something important to you.

Although the Bible never mentions any of these romantic “paths” explicitly in the Bible, God does give us detailed advice on how to handle love.

As Christians, the overarching goal of every romantic relationship should be to glorify God and honor Him.

We need to apply basic principles of love and purity to our romantic relationships. We need to use the overall principles of Scripture as our guide for determining the most Christ-centered, God honoring path towards marriage.

For example, the Bible gives a lot of warnings about sexual sin and avoiding temptation (1 Cor. 6:18, 1 Thess. 4:3-5, Heb. 13:4). With that in mind, would it be wise for a young couple who are highly attracted to one another to hang out alone in one of their bedrooms after dark? Of course not! Why? Because they’re making provision for the flesh. They’re putting themselves in an extremely tempting situation and making it easy to sin.

The Bible has a lot to to say about the wisdom in seeking wise counsel (Prov. 12:15, Prov. 11:14, Prov. 19:20,21). Since the Bible highly encourages us to seek counsel and pursue wisdom, shouldn’t we include that in our romantic relationships as well? How much better off would a young guy and girl be if they sought and welcomed wisdom, advice and counsel regarding their relationship? What if they continued to seek this wisdom and counsel until the day they got married? They would probably avoid a lot of rookie mistakes and enjoy a much healthier relationship.

So you see, the relationship path you choose isn’t nearly as important as the Biblical principles you incorporate into what you do.

If pursuing purity, honor, holiness, wisdom, and Christ-like love are at the top of your list, you will be in a much better position than most people out there.

If you desire to honor and respect your brothers in Christ, you will be careful about playing with their hearts and entangling yourself in a casual “romance.” Especially if you keep in mind the fact that almost every guy you interact with is some other girl’s future husband.

If you have the same respect for marriage as God does (an unbreakable commitment for life and an institution built on faithfulness and purity), you will think twice before casually saying “yes” to just any guy.

What did I do?

It’s only fair to give you a peek inside what path Zack and I chose for our relationship. I would describe our relationship as a mix between courting and dateship. My parents were heavily involved in the process the entire time, but not in a “crazy controlling” kind of way. They were always there to offer us wisdom, guidance and acted as our accountability.

Zack was the initiator of the relationship and approached my dad the good old fashioned (romantic) way. He explained his intentions up front and asked if he could pursue a relationship with me for the purpose of seeking God’s will for marriage. *Sigh…I still remember the butterflies I got that day.*

During our relationship we spent a lot of time with both of our families and hung out with friends in groups. We went on double dates with other couples and had a blast getting a peek inside “married” life. We didn’t do anything alone right at first, but waited until our relationship grew more serious. At that point we would went on dates in public places and enjoyed deep conversations at coffee shops.

Once marriage became an obvious yes for both of us, Zack asked my dad for permission to marry me!

Zack and I both decided to save our first kiss until our wedding day, but we did hold hands as well as other forms of mild physical contact once we were engaged.

I know, I know. To some of you that probably sounds freakishly weird, but it’s really not that crazy. For more on why we chose to save our first kiss read this: Should Christian Girls Kiss Before Marriage?

Why we chose that path.

Our main goals were to maintain purity, welcome wisdom, seek accountability, protect one another’s hearts, and to ultimately honor God.

My purpose in writing this post is to encourage you to seriously consider which relationship path is the wisest, smartest, and most God honoring for you to take when the time comes.

There will always need to be adjustments along the way (trust me, we had many), and customization depending on your individual situation (i.e. long distance relationship, no father figure involved, etc).

Whichever you choose, I pray you will honor God, honor your brother-in-Christ, honor your future husband, and seek purity and holiness above all else.

Let’s chat about it.

I know this is a controversial topic and I would loooooove to hear your thoughts on it! Please hit me up with any questions, comments or concerns you may have. Let’s hash it out in the comment section below! I look forward to chatting with you.