It’s no surprise that when a recent makeup commercial had famous actors and singers quote lines like those, the commercial instantly received millions of views as soon as it hit youtube.

I don’t know if you realize it or not, but 21st century girls have picked a battle, and it’s against themselves.

Girls as a whole have decided that the male and female genders have been viewed as different for way too long. They want to smash that idea into the ground and show the world that girls can be just like guys, and in many cases, even better. They say that the qualities and characteristics that make girls distinctly female need to be removed. Girls need to show the world that there is no difference between genders and that a girl can do anything a guy can do. They say their cry is for equality, which they claim comes from sameness.

Can I ask a couple of questions? Since when did being distinctly girl become so incredibly bad? What’s so horrible about being a girl and why are we trying to fight against being one?

After thinking this through and doing some research, I came up with a few answers. I probably won’t get my own commercial for what I’m about to say and may get some hate mail for this. But I don’t really care. If that commercial can challenge the notion of what it means to be a girl, then I think I can as well. After all, they said that girls can. So I will.

Let’s go back to the very beginning. Do you remember who created the world? That’s right, God did. He then went on to create the male. Notice He didn’t create an “it” or ten different genders. He started out with one gender, the guy. After the guy (Adam) named all of the animals and saw that each animal had a companion, he wondered where his companion was. That’s when God stepped in and created the female. Notice, God didn’t create another male, He specifically created a female. Two distinctly different genders.

Fast forward a couple thousand years to the 21st century. What do we have? Girls and guys demeaning the opposite gender and fighting for sameness. We are in a war against our very own female gender. Instead of fighting to protect our femaleness and holding on to being girls, we are throwing it down the drain. We’ve been told that our value and worth comes from sameness. Unless we accomplish the same things as guys we simply aren’t equal or as valuable. If that’s the truth, then why did God create two different genders? Why didn’t God stop with the male or only create the female? Why go through all of the hassle to create two types if there really isn’t a difference?

2. Is equality based on sameness?

Let’s walk through a simple illustration. Take a look at your hands and your feet. Now think about this, how absolutely ridiculous would it be for the hand and foot to get into an argument over which is more important. It would be *let’s be honest* stupid. We all know the foot is extremely important and the hand is as well. Imagine how silly I would look If I tried to use my hands to fulfill my feet’s functions or used my feet to fulfill the hands functions. Both my hands and my feet bring me the most success in my life when they are working for me by acting in their God given functions.

As silly as that little illustration may sound (or look if you imagine it), it really drives home an important point. Difference and equality are not the same things.

How does that relate to the guy and the girl? As silly as it would be for the hands and feet to get into a debate over which is more important, it’s equally as silly for the male and the female to get into a debate over who is more important. I’ll make this really easy for you, neither the guy or the girl is more important. They are both equally important and valuable in God’s eyes, simply with different functions. Just like the hands and feet, the guy and girl are both at their best, bringing the most glory to God, when they live out their unique God given design.

3. What Makes a girl/guy valuable?

Where does your value come from? Does it come from what you can do, your actions, or something totally different? If you aren’t a Christian and you don’t believe in the Bible, you’d have to stick with the first answer. Your value comes from what you can do and how well you can do it. If you are a Christian and do believe the Bible is true, then your value as a girl (or guy) has nothing to do with you and everything to do with God.

Here is what God has to say about your worth. Guys and girls are both included in this:

You no longer have to fight for your worth like the girls in that commercial do. You are totally valued and loved by the one who created you.

“True womanhood is a distinctive calling to display the glory of His Son in ways that would not be displayed if there were no womanhood.” – John Piper

I challenge you to look at chapter two in the book of Genesis. I want you to see for yourself that God created the male and the female different on purpose. Their worth and value has nothing to do with their differences. In fact, nowhere in the Bible will you see God say that either gender is more important.

It’s time to stop fighting against being a girl.

Stop fighting to become like guys and start embracing your true worth found in Jesus Christ. Only then will you be able to find that purpose and value that you so desperately long for.

The next time you are tempted to prove to the world that “girls can,” stop and ask yourself why? Why do you need to prove your worth as a girl to the world? They can’t add a single ounce of true worth to your life. Only God can. It’s time to stop fighting for sameness and start embracing our differences. All for God’s Glory. 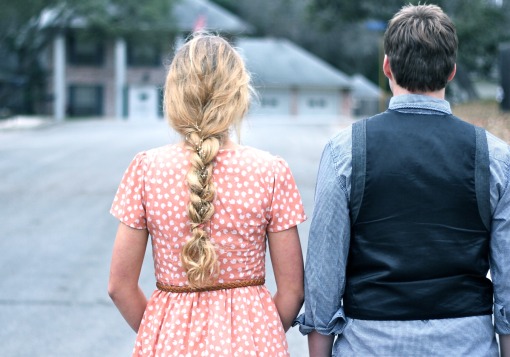