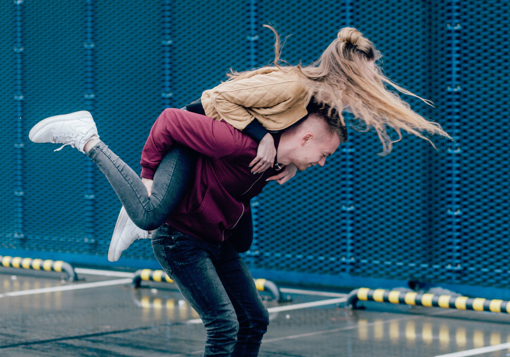 I was once obsessed with a guy. I stalked him on social media. I stalked his family on social media. I purposely went places where I knew I would be around him, and whenever I was around him I made sure I was in his line of sight. The thing was, it seemed to be working! He always made a point to talk to me and was so kind to me. I really thought he was as interested in me as I was in him, only to realize he was being nice to me so he could get close to a friend of mine and ask her out!

This is one of many stories I could tell about how absorbed I was with guys in my younger years.

For a lot of young girls, boys are the most prominent thing occupying their mind and heart. Many single women who desire to get married know this struggle well. Some wear this habit on their sleeves, but many girls secretly obsess over guys without even their closest friends knowing. But even if our hearts stay under other people’s radar, they are never under God’s. He sees our hearts. Do we?

When we expose our preoccupation with guys to the light of God’s word, we start to see what’s really going on under the surface. A biblical perspective shows us at least three things at the heart of our guy obsession: sinful desire, an inflated view of marriage and a deflated view singleness, and a low view of God.

If girls are honest, we obsess over guys because we want their attention. There is something about the attention of a guy that makes a girl feel she has worth. I recognized this at a young age and tried to stop relying on guys for worth by believing that God deemed me worthy. Therefore, I didn’t need a boy. But this was the wrong approach altogether. The message of the Bible is not that I’m worthy, but that God is worthy. When we seek attention from boys to feel good about ourselves, we are not only seeking the wrong thing but have wrong motives. We were not created to draw attention to ourselves or be enamored by our own worth, but to draw attention to God and be enthralled with his. And if we look at scripture, we see that this bent toward self-glory is actually the very root of sin.

Adam and Eve fell for the lie that they could grasp attributes that are only true of God: supreme glory and centrality.

When Adam and Eve chose to pursue their own glory over God’s, all of humanity’s relationship with God was broken (Romans 5:12). Instead of living for the glory of God, we now live for our own. We use a thousand ways to do this, and for many girls, seeking the attention of boys is one of them. A girl’s fixation on a guy is often based completely on a self-centered fantasy and springs up before a girl truly knows a guy or his heart. It’s not grounded on biblical love or even genuine interest in the other person, but on self-serving motives.

If we are ever going to be free from our obsession with boys, we must recognize that guy-obsession is really self-obsession.

For those who trust in the death of Christ for salvation, we have been rescued from sin and given a new heart with new desires – a heart that desires God again (Ezekiel 36:26-27). It is only because of Christ’s death and resurrection that we can be free from the sinful desires that once enslaved us. We must start with the gospel when talking about guy obsession, because it’s a matter of our hearts being freed from sin. Giving tips on how to not think about boys will do no good to a girl whose heart is still dead in sin, unable to desire God’s glory above her own.

But if we do have a new heart, we are able to walk in God’s commands. We are actually capable of genuinely loving God and loving people. Rather than seeking our own glory, we seek God’s. Instead of focusing on being loved by others, we are free to love others, including the guys we have crushes on. Instead of going into a situation scheming about how to elicit the attention of a boy, we can go in thinking, “How can I love and serve people while I’m here?” and “How can I love this guy as a brother in Christ?”

Another thing at the root of guy obsession is having an inflated view of marriage and a deflated view of singleness. I have desired to get married for as long as I can remember. Because of that strong desire, I attached my purpose in life to getting married without really even realizing it. Then came the summer after I graduated from college. I was in many of my friends’ weddings that May. Meanwhile, I was in the middle of breaking up with a guy. Here I was, with little of hope of getting married anytime soon, witnessing everyone else’s wedded bliss. I had a choice. I could either fall into despair or get a better perspective.

By God’s grace, I started studying scripture and what it says about marriage, singleness, and God’s purpose for both. I had read and understood early on that God created marriage to reflect his relationship with the church (Ephesians 5:31-32), but hadn’t worked out what that meant practically for me. I began to understand that if marriage was created to reflect what God is doing in the story of redemption, then God’s story of redemption is the priority, not marriage.

The love story we are all living in is one where God pursues his bride – the church – with self-sacrificial love and wins her heart completely in the end (Revelation 21:1-4).

The Bible also tells us that there is no marriage in heaven (Matthew 22:30). There will be no need for it, because the thing marriage was pointing to all along will have arrived: God and his people together forever.

I also started getting a biblical perspective on singleness. I found a sermon by John Piper[1] that helped me understand Isaiah 54:1, which says:

“‘Sing, O barren one, who did not bear; break forth into singing and cry aloud, you who have not been in labor! For the children of the desolate one will be more than the children of her who is married,’ says the Lord.”

How is a barren, unmarried woman going to bear more children than a fertile, married woman? The chapter right before helps us understand. Isaiah 53 is a prophecy about Christ’s death on the cross. Amidst this powerful passage about Christ bearing our sin and sorrows, scripture says this about Christ: “when his soul makes an offering for guilt, he shall see his offspring” (Isaiah 53:10). His offspring? What offspring? Christ was single and never married. But when Christ came, this is what he told Nicodemus: “Truly, truly, I say to you, unless one is born again he cannot see the kingdom of God” (John 3:3, emphasis added). Peter tells us that God “has caused us to be born again to a living hope” (1 Peter 1:3, emphasis added).

God’s family is not grown by physical birth but by hearts reborn through the Spirit of God.

Therefore, single people have a major role to play in adding people to God’s family. They may not have physical children that share their blood, but they can tell others about the blood of Jesus and bring them into an eternal family.

This concludes Part One of this Two-Part series on guy obsessions. Come back on Monday for Part Two! You don’t want to miss it.

This guest post series was written by Kari Kurz who is an amazing woman of God, writer, and personal friend of GirlDefined. We encourage you to follower her personal blog over at PorchandDove.com.

To dig even deeper into the topic of love, relationships, and guys, grab a copy of our book, Love Defined: Embracing God’s Vision for Lasting Love and Satisfying Relationships.