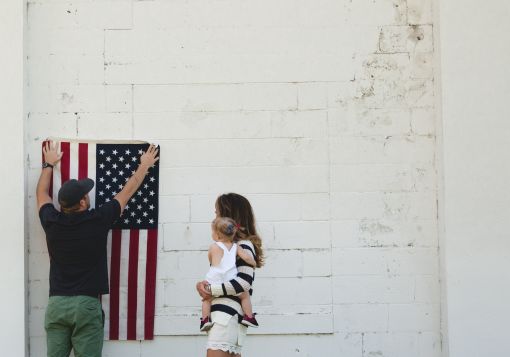 She was tall, blonde, blue-eyed and lived in a tiny town in Austria.

My nana was a beauty and a sweetheart. Having lived her entire life in this small European town, she often wondered what the rest of the world was like.

Marriage was probably her best hope of leaving her small Austria town, the only problem, there were no eligible men to marry.

Little did she know that God would bring someone halfway across the world to sweep her off of her feet and bring her to America! Yep, that’s my grandpa. My grandpa was serving in the US Military and was assigned to her small Austrian town.

Little did either of them know that they would soon meet and fall in love.

Long story short, my nana and grandpa fell in love and moved back to America and that’s ultimately how I ended up here in America.

As I look through my family tree, I see several amazing men who were willing to sacrifice all and join the US military. Not knowing where that choice would ultimately take them, they were willing (for the sake of their country, The United States of America, and for the freedom of the people they loved) to give up their lives.

Although both of my grandpas and my oldest brother served in the US military and were willing to make that ultimate sacrifice for their country, none of them ended up having to do that.

Even still, I am so grateful.

On behalf of me and the Girl Defined Sisterhood, thank you!

If you (or someone you love) serves or served in the military, please comment below letting us know. We would love to express our gratitude!

This should cause us to stop and think.

If these men and women are willing to make such huge sacrifices for their country, shouldn’t we (as Christian women) be more than willing to surrender our lives to Christ and sacrifice for the sake of the gospel?

We need to look to the lives of the faithful men and women of our military as an example.

What’s keeping you from surrendering all to Christ?

My prayer is that each one of us would take some time today to listen to this song “I Surrender All” and make it our personal prayer.