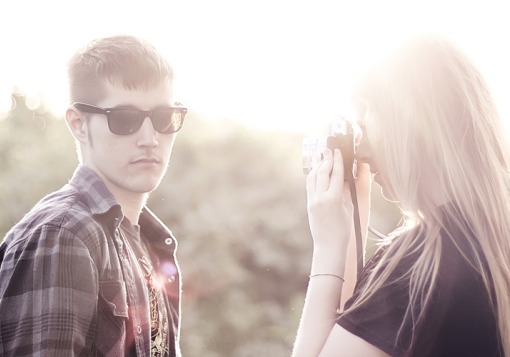 “Hey, my friend wanted me to tell you that he thinks you’re pretty.” This young whippersnapper pointed across the basketball gym towards his friend. I glanced across the gym and noticed a good looking guy sitting on the second row.

“Oh really?” I said raising my eyebrows. “Well, then tell your friend to come tell me that himself.” I smiled.

The guy shook his head in acknowledgment and ran off. Later that day, the “real guy” did come talk to me. He didn’t tell me I was pretty to my face, but he did strike up a conversation.

We had a fun “teenager-style” chat and I walked away with butterflies in my stomach.

I was already looking forward to the next time I would see him.

I chased him instead.

The next 365 days looked like this: Kristen pursuing guy. Guy acting interested, but making no intentional efforts to pursue Kristen. Kristen getting excited because they were “communicating” a lot, but not realizing it was only because of her efforts.

Get the picture? Not good.

And this is how things ended.

When I finally decided to give this guy up, things ended. That was it. When I stopped chasing him, there was nothing left. It was over.

I learned a really good lesson from that experience which is what I’m about to share with you now.

In the “olden days,” it would have been very improper for a woman to pursue a man. Everyone knew it was a man’s job to man-up and go after his woman. Not so much today. In our modern culture, girls are encouraged to chase after boys.

We’re encouraged to follow our heart wherever it leads us.

In fact, the current female pop singer, Ingrid Michaelson, wrote a song about it. The title of her smash hit was named “Girls Chase Boys.” She sings this line 11 times, “Oooooh it’s all the same thing. Girls chase boys chase girls.”

In a behind the scenes interview she was asked why she wrote that song. Here’s what she said, “The focus [of the song] shifted to include the idea that, no matter who or how we love, we are all the same. The [music] video takes that idea one step further, and attempts to turn stereotypical gender roles on their head.”

As a Christian girl, I have a bone to pick with this worldview.

For starters, when girls chase boys they become the leader in the relationship. They become the initiator and the pursuer. Is this a problem? Well, lets see what happened to Ashley when she took this approach.

Ashley liked Jake. She was tired of waiting. She decided to ask him on a date. She paid for their first meal, bought him the first gift, then asked him to be her Valentine. One year later she asked Jake to marry her. He said yes. She purchased both their rings. She planned the wedding. She picked the honeymoon spot.

Now 10 years later, Ashley is tired of being the initiator.

She is tired of carrying the weight in the family. She begins to despise Jake and views him as a lazy pig. Deep in her heart, she wishes he would take some initiative. She wishes he would pursue her, for once.

Sadly, this model for relationships is becoming all too common in our society. I hope you can see the obvious pitfalls.

When girls chase boys they really don’t get what they want.

When girls chase boys, we’re unknowingly encouraging the guy to be a follower. We’re encouraging him to be the responder, rather than the initiator. Even a strong headed woman like Ashley didn’t like what she got in the end.

God designed men to be the leaders and women to be the responders. We see this pattern all throughout Scripture. When we try to take matters into our own hands (like I did), things never turn out well in the end.

We force relationships to happen that shouldn’t. We get romantically involved with a guy who isn’t even interested in us. We get our hearts broken because we’re jumping the gun.

Can you relate to this?

With Valentines day right around the corner, it can be easy to “chase boys.” I pray you will see the pitfalls in that method. Instead, let the boy chase you. Let him pursue you. Let him be the man.

And if he doesn’t, that’s okay. Don’t force it. God will bring the right man into your life at the right time. And if he’s godly and mature, he will pursue you.

Instead of crippling the guys in your life (like Ashley did), help them become men.

The best way to do this is to embrace your God-given femininity. The more feminine you become, the more you will encourage the men in your life to become men.

What about you? Let’s chat.