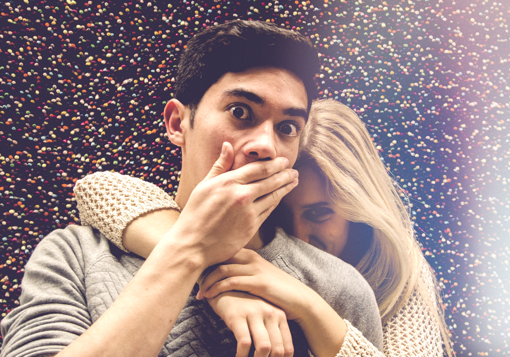 I was standing in line at my local grocery store when an obnoxious magazine caught my eye. I’m used to seeing half-naked women on the cover of tabloids, but this image seemed even too edgy for a tabloid.

As I tried to refocus my thinking on something more positive, a middle aged couple got in line behind me.

I watched in curiosity as the wife reached over and selected that magazine off the rack. I watched even more curiously to see what she would do with it. To my shock, the wife held that magazine cover up to her husband’s face and said, “Wow, wish I had a body like that!”

Her husband chuckled as he happily perused the cover until she removed it.

As I thought about that puzzling scene over the next few days, I began to wonder… Maybe that wife didn’t understand the value of sexual purity in her marriage. Or, maybe that wife was clueless about lust and temptation. Or, maybe she wanted to prove her “security” by appearing non-jealous.

I’ll never know what that wife was thinking, but I do know this – she didn’t seemed one bit concerned with placing a direct sexual temptation in her husband’s face.

That, right there, is a big problem.

Sexual temptations bombard the guys in our life on a daily basis and they don’t need us adding to the struggle.

Unfortunately, I don’t think we, as Christian girls, fully understand that. I’ve been guilty of this and I’ve seen many other Christian girls who have been too.

For example, I was over at a Christian family’s house several years ago when I noticed a provocative CD cover on their living room shelf. The CD featured a totally nude image of the backside of a female. I learned later that the CD was the wife’s.

I’m guessing that wife was unaware of how sexually tempting and unhelpful that image would be for her husband and her sons.

Another time I was staying overnight in the home of a Christian family. The daughters were all involved in ministry and their dad was the associate pastor of their large church. While using their bathroom, I noticed a pile of tabloids next to the toilet. Half-naked women filled these magazines as I quickly glanced through one.

These seductive magazines belonged to the sisters, and I’m sure they had no idea how tempting they could be for their dad and brother.

Another time I was over at a friend’s house for a casual lunch get-together.

She had the TV running in the background with one of those reality supermodel shows on. Her husband was walking back and forth doing house projects. When the commercials weren’t playing, the TV was filled with half-naked bodies of models doing sensual photo shoots.

This wife seemed unfazed by the amount of nudity and skin blaring on her TV. I’m guessing she had no idea how tempting these images could be for her husband.

All of these Christian girls and women were unknowingly tempting the guys in their life towards lust. They weren’t doing it on purpose, they were most likely just naive. They were bringing immodest, sexualized, and sensual women into their homes without even thinking about it.

As I’ve learned from my husband, Zack, over the years, this does not aid him (or any man) in fighting against lust.

I’m simply saying that we, as Christian girls, need to be more aware of what we bring into our homes and what we show our dads, brothers, and guy friends.

To all of my fellow Christian sisters out there: Whether you realize it or not, the guys in your life have to fight against lust every time they walk out the front door or turn on the internet browser. Sexualized billboards, raunchy magazines, immodest women walking by, and pornographic pop-up ads attack these guys on a regular basis.

The amount of sexual temptations they face on a daily basis is unreal.

Let’s not make it any harder on our Christian brothers than it already is. Whether your dad, brother, boyfriend, or guy friend asks you for it or not, there are a lot of things you can do to help him fight the battle.

Here are some things I’ve done over the years that my husband really appreciates:

I know these things may sound extreme to some of you and I understand why. It’s not normal.

However, the way Zack and I see it, it takes extreme measures to fight for purity in our modern sexualized culture.

We’re both committed to helping each other out and doing whatever we can to fight for purity.

As Christian girls, I pray we will all see the value of fighting for the guys in our life by making the necessary sacrifices to help them succeed morally.

I’d love to hear from you on this topic.