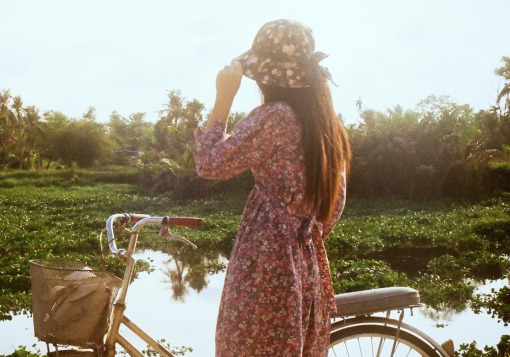 I once knew a girl who said she loved God. She called herself a Christian and even went to church every Sunday. But the rest of her week was full of activities, school, sports, friends, and just plain busyness.

She occasionally read her Bible…but mostly because it was the “right” thing to do. She attended a church youth program once a week, but cared more about hanging out with her friends than growing spiritually.

Sadly, this girl began struggling on the inside. She wanted to be a strong Christian, but did very little to help herself get there.

I wish this girl was someone else, but she’s not. This girl is actually me.

Sadly, this story accurately portrays me during some of my early high school years. Deep in my heart I wanted to do the right thing and honor God, but I had a problem. A major problem. A problem that most Christian girls face at some point.

The problem goes something like this. See if you can relate.

I called myself a Christian and I always went to church. I tried to read my Bible on a fairly regular basis. I had amazing Christian parents too! I thought I was on the road to becoming a God-Defined girl, but when I searched a little deeper, I realized something wasn’t right.

Although I looked like a “good” Christian girl on the outside, my heart wasn’t grounded in God’s truth. The Bible wasn’t always the starting point for everything I believed. Going to church once a week and occasionally reading my Bible was good, but it wasn’t enough to turn me into a God-defined girl.

The rest of my time was spent filling my mind with the world’s ideas.

I was listening to the world’s music, watching the world’s movies, talking about pointless stuff with my friends, pursuing my own pleasures, and satisfying my own desires. I spent way (and I mean way) more time loading my heart and mind with the culture’s ideas than I did God’s.

Without even realizing it, I was slowly becoming the opposite of what I wanted. I was becoming a culture-defined girl. The secular culture was telling me how I should dress, act, what I should watch, listen to and read. And I was slowly giving in.

Little by little my actions and choices were being shaped by what the world said was “cool” and “popular.”

My biggest problem wasn’t that I didn’t desire to become a God-defined girl…it was that I did very little to actually become one.

Can you relate to me on this?

As I entered the middle of my high school years I decided things needed to change. God was convicting my heart. I knew if I stayed on that path, I would move further away from His truth.

So I took action.

Instead of allowing the culture to “tell” me how I should do things, I began using the Bible as my starting place. God has things to say about everything in life and I wanted Him to be the source for what I believed. Whether it was romance, movies, fashion, friends, time, or relationships, God’s Word speaks to it. Sometimes directly and sometimes indirectly through principles and wisdom.

Here’s how it worked.

I also began removing the negative cultural influences in my life and started filling my mind with helpful truth. I started reading solid Christian books to help me grow spiritually (visit our resources page to find some). I cut out most of my secular music and only listed to Christian songs. I stopped watching as many movies and became pickier about what went into my mind.

I took serious measures because I knew becoming a God-defined girl took hard work and intentionality.

Little by little the Bible became my starting place for truth. Instead of allowing the culture to inform my worldview, I was informing my worldview based on God’s truth.

Even now, in my late twenties I still strive for this. I’m not perfect and I don’t always make the best choices, but my heart’s desire is to honor God. Becoming a God-defined girl in a culture-defined world isn’t easy, but it’s worth it.

As humans, we were created to find purpose, fulfillment, and security in our relationship with Christ.

When we obey God and do things His way, life becomes much less confusing.

I have some questions for you. Who or what is informing your worldview? Is it the Bible or the culture?

If the average Christian girl spends hours and hours a day filling her mind with culture-defined information and she only spends one hour at church on Sunday mornings, which worldview do you think she is most likely to live out?

If you want to become a girl defined by God’s Word and His standards, you have to seriously invest time into it. Dig into the Bible. Study it. Learn it for yourself. Strive to understand how God wants you to honor Him in every area of your life.

Don’t allow the culture to define you.

Let’s continue this conversation in the comment section below!

Have you been guilty, like me, of filling your life with more of the culture’s ideas than God’s? Comment and let me know what you’re going to do to become a girl defined by God!