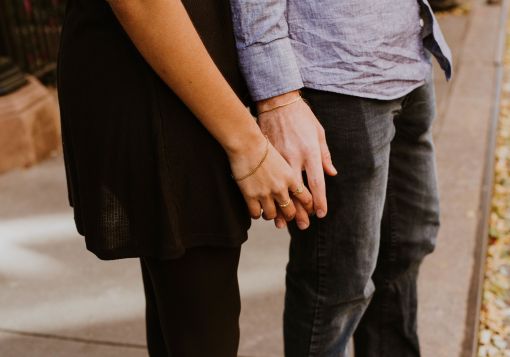 His blue eyes and curly brown hair were enough to make me swoon. I loved hanging out at the basketball gym. I loved watching my crush play. In my eyes, this guy was drop dead hotness.

I loved everything about him.

His hair, his snapback, his eyes, his skills, and the way he wore baggy athletic shorts and a sweaty t-shirt. He was perfect in my eyes.

Oh, and did I mention that the two of us had never actually spoken?

Yep! That’s right. I was in love (or in like and totally infatuated) with a guy I had never even spoken to. I didn’t know the first thing about his heart, his character, his relationship with God, or the basics of his personality.

I looked. I liked. I crushed. I fantasized. That was my idea of a healthy high school crush.

As the years rolled on, my high school ideas for romance followed me into adulthood. I clearly remember being in my early twenties and viewing “potential husband options” through the lens of physical attraction.

I knew that character was a big deal, but attraction was definitely number one on my list.

I wanted to be with a guy who gave me butterflies in my stomach. I wanted to feel ooey-gooey on the inside. I wanted him to take my breath away.

And then my dreams came true. The hottest hunk on the planet started to notice me. He started to pay attention to me.

This guy was everything I could have hoped for.

He was super attractive and seemingly godly. Serious win!

Throughout the course of getting to know this handsome dude, God started to do a work in my heart. I began to feel the conviction. Did I really like this guy because of his godly character, or, did I like him for his looks and how he made me feel.

Long story short that quick romantic “fling” ended as quickly as it had started.

In the weeks, months and even years that followed, I began to rethink my priorities. what did I really value in a guy? What type of guy did I really want to marry? Did I value attraction as more important than character?

Thankfully God did some serious refining in my heart and in my mind.

He really changed my perspectives and truly gave me a new set of eyes in the way I view guys.

I’m guessing many of you can relate this topic. You want a guy you feel attracted to, but you also want a guy with character. So, what’s the balance? Is attraction really all that it’s cracked up to be? What should we, as Christian girls, value the most?

Those are great questions!

I want to share a few insights that have really changed my perspectives and helped me answer those questions. My hope is that these little bits of wisdom will help you answer the question, “how important is attraction in a romantic relationship?”

1. Don’t Make a Decision Based Strictly on Infatuation

Way too often we, as Christian girls, view guy’s through the lens of infatuation. The sparks. The Chemistry. The feels. The flutters. That’s what we value most. We want a guy who can give us that special nervous feeling in our stomach.

This is a really unwise way to choose a potential future husband, though. Choosing a guy based solely on how he makes you feel is very foolish. In his book, The Sacred Search, Gary Thomas describes it this way.

“Too many single women overlook some serious character flaws or maybe even an absence of faith. Because their feelings are so strong, they just can’t believe this isn’t a match made in heaven. Rather than honestly explore whether this man is worthy of their trust and worthy to become their kids’ father, they spend their energy trying to explain away his apparent flaws and to make his spiritual maturity seem acceptable to friends and family members.”

2. Make Character the Most Important Quality

When considering a potential option, look for a man with character. Make that your number one priority. Don’t get caught up in Hollywood’s ideas of feelings based attraction. Don’t base your decision on sparks alone.

Think about 1 Corinthians 13. What kinds of things does God say describe true love? Patience. Kindness. Humility. Not easily angered. Keeps no record of wrongs. The list goes on.

3. View him The Way God Views him

The Lord looks at the heart…Wow. Quite a different perspective. Just remember, physical health and appearance is a ticking time bomb. He will grow old. He will get weak. His health will eventually give out and he will one day die. His health and strength is not a guarantee. You might marry a physically strong man, but what if he loses it? What if something happens and something changes?

If you choose to marry for character, that can’t be taken away from Him. His health may fail, but his heart for the Lord can stand strong even in a weak body.

4. What Kind of Man do You want to Marry?

Think about your life 5, 10, even 20 years down the road. What kind of qualities will you want in a husband and father? Will you care if his muscles are still bulging and the ladies swoon as he walks by? Or, will you want a man who cares about you? Spends time with the kids? Loves his family? Prioritizes God? Invests into other spiritually?

Don’t marry a man based on the idea of being young together. Marry a man who you can imagine yourself growing old with. If you can imagine being old, crusty, and genuinely still very much in love, that is a man worth considering.

So is attraction important?

Yes, of course, it’s important. God clearly designed us to have feelings, emotions, passion and attraction. That is a beautiful and amazing aspect of a romantic relationship. It also seems pretty clear in Song of Solomon that Solomon and his bride were intensely and passionately attracted to one another.

I challenge you to evaluate what most attracts you to a guy.

Do you value character first and foremost? Why or why not?

When you get fifty years into marriage, what will you value in a man at that time?