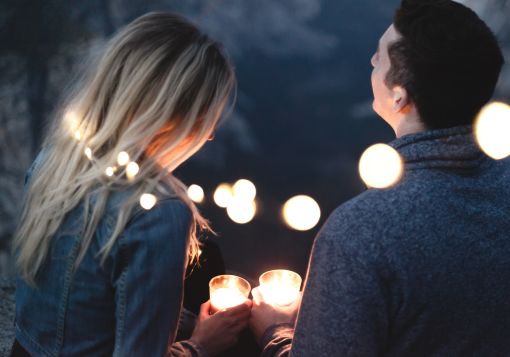 My boyfriend and I had been pursuing an intentional relationship for quite some time. He was ready to move forward into engagement. I wasn’t so sure. I wanted to make sure I was making the right decision.

I’d been in the relationship long enough to have all of the facts in hand.

I knew the ins and outs of his personality. I knew his strengths. I knew his weaknesses. I knew his likes and dislikes. I knew his convictions. There was only one thing left for me to figure out. I needed to decide if I wanted to commit to spending the rest of my life with him.

Questions started to bounce around in my mind as I tried to figure out if he was the one I wanted to spend the rest of my life with.

I ended up taking some time to seriously pray, think, and seek out wisdom concerning that relationship.

After much prayer and counsel over the relationship, I was convinced that he was not the one I wanted to marry. I didn’t want to spend the rest of my life with him. I truly believed that we were better off separate than together.

Despite the pain and sorrow of the breakup, I was deeply convinced that it was the right decision.

I want to share with you the questions and thoughts that ultimately helped me make that decision (this isn’t an exhaustive list, but simple questions that truly helped me during this time).

My prayer is that these questions and thoughts will help you answer the question, “how can I know if he’s the one I should marry?”

1. Do We Encourage Each Other Spiritually?

When I took the time to seriously evaluate this question in my relationship, I realized that we really didn’t encourage each other spiritually. Unfortunately, his spiritual leadership seemed to lack as the relationship continued progressing.

He would talk about wanting to make Christ the focus, but couldn’t seem to follow through on making Him a regular part of our lives. This became a huge red flag for me and I realized. I wanted to marry a man who had the desire to genuinely lead me closer to Christ. I just don’t think that this guy desired to do that.

2. Is Christ the Central Focus in Our Relationship?

I soon realized that our relationship was actually built upon a foundation of infatuation and self, not on Christ. This was not what I wanted for my future. I wanted to be with a man who strived to make Christ the foundation, not our love and passion for each other. This was a red flag that took me one step closer to realizing he wasn’t the one for me.

3. Does My Family Support Our Relationship?

The relationship seemed to start off really well and my family was very supportive. As things continued on, my family began to notice a lot of inconsistencies in my boyfriend’s life. They began to wonder if he was truly a great match for me.

Towards the end of the relationship, my entire family (every sibling and parent) were on the same page. After praying and observing, they all (at individual and different times) shared their concerns and advised me to end it. Wow! Talk about a clear red flag. I took their wisdom and input seriously and came to see that their concerns were very much true.

4. Does He Respect My Purity?

When this guy and I first started a relationship, he was very honorable and respectful. He said all of the right things and seemed to live them out. As the relationship progressed, his guard came down and I began to see deeper into his character and heart.

His respect for my purity began to fade and I soon realized that his words were just that…words. They weren’t so much a core conviction but more of the right words to say to get me to like him. His lack of respect for my purity was a big concern of mine. This was a red flag that pushed me closer to ending the relationship.

5. Do We Share a Similar Vision and Passion for Life?

Towards the end of my relationship with this guy, I started to realize that we didn’t share a similar vision and passion for life. Yes, we were both Christians. Yes, we both went to church. Yes, we had some spiritual things in common. But that was about it. He really didn’t share my drive and passion for ministry and discipleship. He was more of a Sunday morning Christian and not so much an active live out and serve during the week.

I knew I wanted to marry a man who was passionate about God’s Kingdom week in and out, and this guy didn’t seem to have that. Another red flag that helped me make my decision.

Answering those questions helped me to end the relationship.

If you are currently in a relationship, I hope you will take the time to answer those questions for yourself. Take time to seriously consider your relationship. Take time to figure out if this is the man you truly want to commit your life to. It’s a huge decision that needs to be taken seriously.

What qualities are you looking for in a future husband?

What kind of man do you want to commit to spending the rest of your days with?