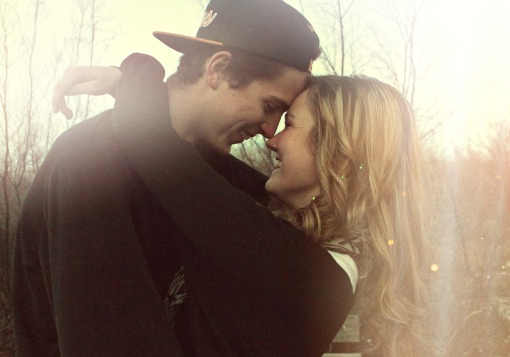 The tension was building. Something big was about to happen. Everyone felt it. The romantic story had been a roller coaster of ups and downs, sorrows and joys. But something was about to change.

As the young couple finally realized their passion for one another, it happened. They embraced one another and engaged in a full blown make out session. I sat there watching this climactic scene unfold.

And…after about three seconds, I began to feel awkward.

I glanced around the room to see if anybody else looked uncomfortable.

Nothing. All eyes were locked on the screen. After what felt like an hour, the kissing finally stopped.

I’ll be honest with you.

Staring at a couple while they passionately kiss makes me feel a little awkward. Ever since that day (which was back in high school) I’ve had a question in the back of my mind. “Why did I feel awkward watching that make out scene?” “Why do I feel uncomfortable every time a movie or show lingers on the kissing scene?” Am I weird? Abnormal? Immature?

I don’t think so.

After recent research on this topic I realized I’m not the only person who feels this way.

Ray Comfort addressed a very similar issue in a recent movie he created. Only he took his questions to the streets to find out what the general public thought.

He asked random people if they would be comfortable peeking into their neighbor’s bedroom window while the husband and wife were intimately engaged. Most people instantly appeared shocked and disgusted. “Of course not!” most replied. “Creepy,” others said.

Ray Comfort then asked them if they were Christians and if they watched R rated movies.

Most said yes to both.

“Okay,” he continued. “In the movies, do you watch the sex scenes?” Almost every single person said yes. Some people looked ashamed, others not. “So, let me get this straight…” Ray said in his typical Ray fashion. “You think it’s wrong to peer into your neighbors window at an intimate scene, but not wrong to peer into the your TV at an intimate scene?”

His question stunned them.

Apparently nobody had ever thought about it like that before.

After watching his video it finally clicked for me why I felt so awkward watching people passionately make out.

The reason is simple: Intimate, sensual moments are meant to be just that. Intimate.

Why do you think the couple on the movie screen doesn’t have a built in audience watching them? Why are the intimate scenes almost always two people alone? Because intimate scenes were not created for an audience.

It’s not how God designed it.

Passionate kissing is a very intimate act between two people (and it’s very different from a light kiss). That’s why you’ve probably never seen your parents make out in front of you. It just wouldn’t seem appropriate. Why? The same reason as before. Intimacy is meant to be intimate…and it’s hard to do that with a crowd watching.

So when did we, as a culture, become so comfortable with watching people make out on the screen?

Well, it happened like a frog in a pot of boiling water…slowly and over time. Hollywood movies used to keep private matters off the screen; but not anymore.

Little by little they cranked the heat up until most people felt comfortable watching something that would make past generations blush.

Okay, if you’re reading this and you don’t feel awkward watching someone else engage in passionate acts…let me ask you this. Would you feel comfortable having a group of people watch you do the same thing with your future husband? Would you want your siblings, parents, pastor and friends watching you engage in those intimate moments?

My guess? Probably not.

So why are you okay with watching other people do it?

Hollywood has done such a great job of bringing intimacy to the screen that we hardly think about it anymore. We hardly blink when an intimate make-out session starts.

What used to be sacred and special is now common and cheap.

As Christians, we must have a God-defined worldview on this. Just because it’s on a “screen” doesn’t mean it’s okay to watch. Instead of accepting whatever Hollywood throws our way, we need to think carefully and biblically in our modern times. We need to question everything we watch and are “entertainment” by.

We need to ask ourselves probing and honest questions such as….

Does this passionate scene tempt me to lust?
Am I watching something that should be reserved for the privacy of a bedroom?
Do intimate scenes encourage me to dream of sexual fantasies?
In what ways will this scene help me remain pure?
Would I feel awkward if God was sitting in the room next to me?
Am I dulling my conscience by watching this?

I hope you’ll take some time to ask yourself those questions.

A great way to avoid unwanted scenes is to avoid certain movies altogether. Reading Christian movie reviews from Plugged In is a great way to figure out which movies are better left unwatched. I rarely watch a movie without first reading the review. I can’t tell you how much money, time, and brain cells I have saved by doing that.

Let’s chat about this…

I know this was kind of an off-the-wall topic…I just felt really prompted to write about it. I would love to hear your thoughts, questions, and feedback!

But first, let me ask you a few questions.