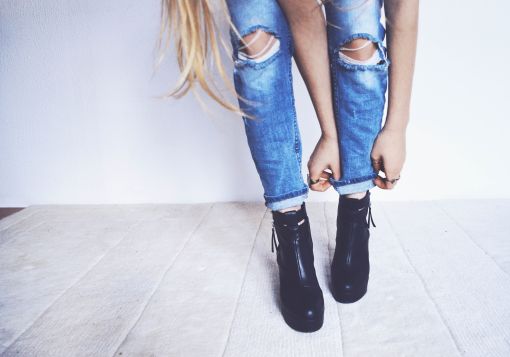 I recently met Jana, a girl from Germany, who is living in America as an au-pair nanny. She told me that, “getting a chance to live in America was like a dream.”

Now that she has been here for a good 8 months, I was curious what her perspective on America was.

Jana described America as a place where, “everyone appears to be living in a fantasy in the public eye, but they are depressed and unhappy when they are at home.” She continued, “all of the girls, old or young, seem to put so much focus on their outward appearance. I feel like I am a normal dress size when I am in Germany, but when I come here, even the moms with two kids are skinnier than me”.

Obviously, not everyone is that way, but from her experience in America, that’s been her perspective.

Jana wanted to fit into the typical “Hollywood girl” stereotype, so she had her hair bleached blonde right before she came. She wanted to feel pretty and from her perspective a “pretty girl” had bleach blonde hair.

Jana confessed that she surprisingly wasn’t any happier and didn’t feel any prettier with her bleached blonde hair.

Throughout my time of getting to know Jana, I was sadly reminded of the reality that American people (as a whole) are completely obsessed with themselves and their outward appearance.

In order to be happy and fulfilled we, as girls, are fed the lie that we must have the whitest teeth, tannest skin, perfect hair and most toned body. Jana felt the pressure to measure up to the impossible “beauty” standard when she first arrived in America, but quickly began to question its depth after getting a sneak peak behind the scenes of several American women.

Jana started to question if the “pretty face and perfect body” was really all that it was cracked up to be.

I was so privileged to have the opportunity to explain to Jana that as a Christian, I don’t find my security in my outward appearance, my wealth, or my accomplishments as a woman. I described what Jesus did for me on the cross and how I strive to find all of my worth in and through Him.

I shared with her Proverbs 31:30 which says, “Charm is deceptive and beauty is fleeting but a woman that fears the Lord shall be praised.” I explained to her that humans tend to look at the outward appearance but God looks at the heart.

I explained to her that even if I was the skinniest, tannest, tallest or the sexiest, I would never feel totally satisfied. God is the only one who can fully satisfy our deepest longings long term. He, as our Designer, is the only One with the authority to define our worth.

I was personally super convicted by Jana’s perspective of American women.

Each of us needs to search our heart and honestly ask ourselves where we are looking to find our worth and value as women. Are we allowing Hollywood’s version of beauty define our standards? Are we looking to our outward appearance to give us worth and satisfaction?

I want to remind you of the verse that I shared with Jana.

I want you to search your own heart and make sure that your definition of beauty comes from God’s Word and not Hollywood.

“Charm is deceptive and beauty is fleeting but a woman that fears the Lord shall be praised” (Proverbs 31:30).

In what ways have you believed the lie that your worth as a woman is found in your outward appearance?

How can you realign your heart with God’s truth?