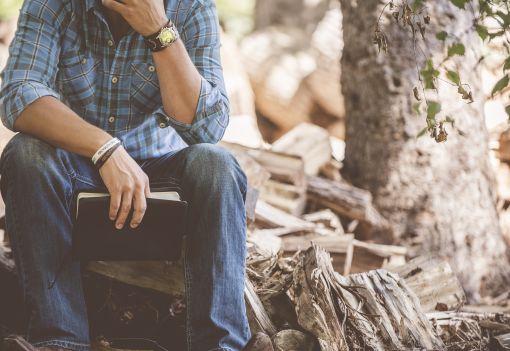 What better place to observe the possibility of chivalry than in a room full of young singles at a Bible study. And that’s exactly where I was. The room was packed to the brim and almost every spare chair had been pulled out and used by the late arrivals.

Somehow a young lady had squeezed in unnoticed and ended up without a chair. She quietly made her way to a small ledge and found a way to lean/sit against it.

After a few moments, I noticed a kind young man quietly making his way towards her with his chair. He started to pull the chair out and set it up in front of her. At first, she said, “no thanks” and continued with her lean/sit situation.

The young man didn’t give up.

He quietly offered it again in a way that was so kind and caring. She finally accepted his act of chivalry and graciously took the seat.

I smiled inwardly and was encouraged to see such a kind act of chivalry from this guy.

He didn’t have to do what he did, but he did it anyway. He went out of his way to selflessly serve this young lady and used his strength in a good and God-honoring way. I was also proud of this young woman for denying her feelings of hesitation and accepting his offer. She didn’t have to accept his act of chivalry, but she did.

God-defined gender distinctions are sadly becoming a thing of the past.

What used to be, “women and children first,” is now, “every man/woman for himself.” It’s not so much that men have stopped shouting, “women and children first,” it’s that so many of us, as women, have overpowered them with statements like, “We can take care of ourselves. We are just as good as you and don’t need a man to help us. Don’t pay for our meal. Don’t open our door. Don’t give us your seat. Don’t demean us with your acts of chivalry.”

Somehow and someway we’ve been deceived into believing that chivalry is demeaning.

That true womanly strength means rejecting acts of bravery and kindness and fending for ourselves. We’ve been told that real women defend themselves, take care of themselves, and make sure that men are put in their place… below women.

I hate to say this, but, that message is all a bunch of garbage.

We as women need to get back to the root of God’s Word and see if our hearts and actions match up to God’s truth about gender. Not the culture’s messed up version.

God-defined women don’t feel the need to prove their strength and worth to those around them.

God-defined women don’t feel the need to put men down.

God-defined women don’t deny acts of chivalry out of a heart of pride.

God-defined women don’t view men as lesser than themselves.

I’ve realized that it truly takes a strong woman to embrace gender distinctions.

It takes a strong woman to put away her pride and accept acts of chivalry from men.

It takes a strong woman to reject the culture’s definition of manhood and womanhood.

It takes a strong woman to acknowledge her special and unique God-given feminine qualities.

It takes a strong woman to accept the fact that men and women are created equally valuable but purposely different.

My prayer is that each one of us will start small by accepting acts of chivalry from men. Allow men to help and protect you in the little ways. Cheer men on as they learn to use their God-given strength to love and serve the women around them.

I want to ask you some real and personal questions.

Are you hesitant to accept acts of chivalry from men? If so, why?

Are you afraid to allow men to treat you with kindness and care?

Do you push back when a man offers you his seat? Opens a door? Pays for a meal?

In what ways can you do a better job of accepting acts of chivalry from the men around you?