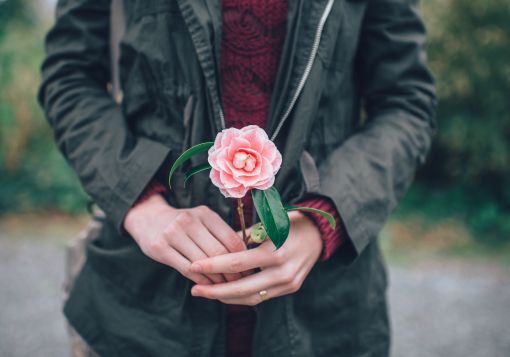 There it was again.

That special look from a guy in my class who was a sandy-haired, blue-eyed walking Gap ad. This time, I hadn’t been mistaken—it was clear that he thought I was cute. The reality of that thought spread a foolish smirk across my face, and I felt my brain suddenly turn into a bowl of pudding.

During that semester, his admiration was consistently obvious but not aggressive. I enjoyed the attention and began to look forward to receiving that lovely sense of affirmation every time I saw him.

Does this scenario sound familiar?

As Christian women, how on earth should we react when we receive attention from a guy?  What should we do when the grocery clerk flashes a grin, or when that stylish guy at the mall happens to meet our gaze the second before he passes by? How do we cope with these strong desires to be noticed and admired?

First off, God is the One who designed male/female chemistry in the first place.

However, Satan always wants to twist God’s gifts and turn them into idols in order to distract our hearts from the ultimate gift-Giver.

Back to the cute guy at school.

The whole situation began to feel like a porcupine sitting on my conscience.  It was so tempting to want to soak up the flattery.  After all, I thought, I’m not doing anything about it! I’m not even flirting with him.

It took a while for me to realize that I was living a private, double standard in my own mind. The hidden desires of my thoughts were revealing my true, prideful heart.

I knew I wouldn’t consider anything serious with this random guy from school who wasn’t even a Christian, but I still wanted the temporary perk of feeling desirable. I was, in fact…using him.

When we as women rely on male attention for some sort of rush or ego-boost, we are using men as objects for selfish gratification. The same principle applies when men objectify women by lusting after their bodies.

So what’s a girl to do when confronted by a melting glance of masculinity?

First off, seek to guard your mind on a continual basis with a fortress of truth. This means being in the Word every day so that, when the moment arises, you have a wise perspective in the forefront of your brain.

Second, view the male in question as a human being—not your slave of adoration. Remember that you are both made in God’s image, and are therefore worthy of mutual respect and selfless love.

Third, “bounce” your thoughts elsewhere.  Instead of reveling in the fact that he’s noticing, quickly focus on something else. I’ve seen my dad do this type of thing on numerous occasions—except, from a guy’s perspective.  If he happens to see a Victoria (Not-So) Secret banner, he quickly bounces his eyes away.

When you’re struggling with an overwhelming desire be admired, even if it’s only temporary, remember the following truths:

Satan’s path can look extremely inviting and can be initially very easy.

But Satan is the great deceiver.  He wants us to believe lies about everything, including how we think about guys. He wants us to TAKE for ourselves and THINK only of ourselves. He encourages fantasizing about guys in our minds.

God’s path can look extremely burdensome and can be initially very hard.

But God is the great Lover of our souls. He wants our ultimate joy in everything, including how we think about guys. He wants us to GIVE ourselves away in service and THINK only of pleasing Him. He encourages us to take every thought captive to the obedience of Christ.

So here are some practical tips that may help as you seek to maintain a balanced attitude about male attention:

Don’t watch out of the corner of your eye to see if he’s noticing you. That momentary decision will help reinforce the truth that male affirmation isn’t what makes you a valuable, beautiful woman of God.

Think about respecting men (and being respectable in the process) when you put clothes on in the morning. For more modesty tips, check out the Kristen and Bethany’s Project Modesty ebook and video!

3. If necessary, remove yourself from the situation.

If you notice that a man is staring (especially in a lustful manner), position yourself out of his line of vision. Flee from temptation for your own sake, as well as for his!

God knows that His daughters will only feel truly secure and valued when He is the source of our security.  I hope that the next time you are noticed by a guy, you will thank God for creating you to be beautiful, praise Him for modest femininity, and seek to honor Him in your mind.

So tell me, have you struggled with a warped craving for male attention?

Do you find yourself needing “looks” from guys in order to feel good about yourself?

What are some other tips you can think of to fight for purity in this area?