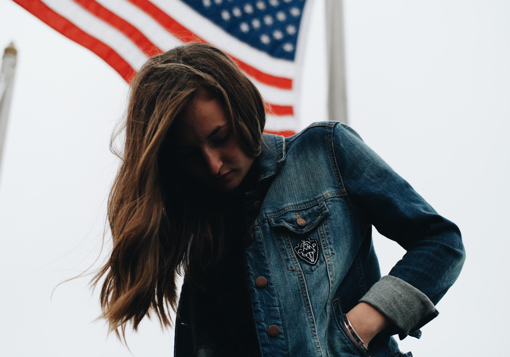 “Hey honey, I really think we should go talk about this some more,” Zack said in a serious tone.

We had just finished having a rather intense discussion about something that we didn’t see eye-to-eye on (at all). My emotions were completely driving the train and I was “done” discussing it. I crossed my arms like a child throwing a fit and looked up at him with a frustrated look.

“Babe, come on.” He said in a firm, but loving tone. “Let’s go finish this conversation. We need to.” He gestured for me to join him on the couch.

I could feel my independent spirit rising up from deep within me.

I didn’t want to discuss this “issue” anymore, and I didn’t feel like talking to him right now. Instead of showing my husband honor and respect in that intense moment…I totally caved in to my sinful desires and feelings.

“I don’t want to,” I said resolutely, staring up at Zack. “And I’m not going to. I’m done with this conversation for now.” And with that, I walked away.

Ouch. My words and attitude were u-g-l-y! (Now you know how sinful I can be!) It wasn’t pretty. I had allowed my “independent” and selfish heart to rule over my obedience to God’s word. I knew I was called to honor and respect my husband (Eph. 5:33)…but in that moment I didn’t care.

I wanted my way more than I wanted to honor God or Zack.

Thankfully, by God’s grace, I recognized my foolish and independent heart, and repented pretty quickly. Zack and I were then able to work through our conflict like two mature, Christian adults. And we did. Hallelujah.

It’s something that we, as women, are encouraged to embrace from a very young age. Our culture upholds independence as one of the greatest accomplishments for women to achieve in our life. And I’m not just talking about the kind of independence that enables you to go to the store and shop by yourself (that’s a healthy level of independence).

I’m talking about a much more dangerous type of independence.

In our book, Girl Defined, we write this about independence:

“But I thought it was healthy for women to be totally independent?,” someone recently asked me in response to this section in the book.

And unfortunately, our culture is pushing for us to be independent in many of the wrong ways.

The mindset for independent women that is encouraged in our modern culture sounds something like this:

Ouch. Yep – some of those statements were going through my head during my conflict with Zack that day.

How many of those statements have you said (or even thought)? Maybe you’re even feeling some right now.

When we, as women, embrace this extreme mindset of independence, we unknowingly shove everybody else aside (including the men in our life), and place our desires on the top of the list. We even begin to lose sight of God’s authority in our life, and start thinking we’re the boss.

We lose respect for outside wisdom. We compete against others rather than serve them. We become close minded to others’ opinions. We disrespect the men in our life (dad’s and/or husbands). We become extremely self-focused. We ignore God’s commands for our life.

Regardless of what our culture is praising in modern women, I’m here to say that being independent isn’t always good.

Philippians 2:4 is just one example of why this attitude isn’t helpful: “Let each of you look not only to his own interests, but also to the interests of others.”

As Christian women, we are called to be like Christ. And Christ came to serve, not to be served (Matt. 20:28). Extreme independence often promotes pride, while selflessness produces humility.

Instead of jumping on board with the independent current of our day, I pray you will carefully guard yourself against this damaging mindset and attitude. We need others and we need God. We weren’t created for total independence, but for healthy dependence and love for one another.

For more on this topic, you can grab a copy of Girl Defined and check out chapter 3.