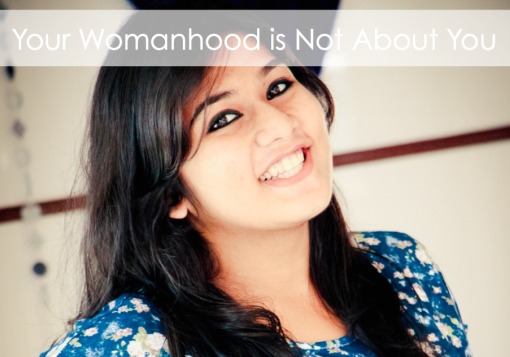 After a long and deep sleep Adam finally woke up. There before his eyes was the most beautiful creature he had ever laid eyes on. This newest creation was beyond anything he could have ever imagined. He immediately realized that this beautiful woman was perfectly designed for himself.

She had been taken from his very own body and was fashioned to fit him perfectly.

Can you imagine how Adam must have felt that first moment he laid eyes on Eve? Wow! What a way to get a woman. Not only was Adam getting a companion, lover, and friend, he was getting a woman who would compliment him and help him both physically and spiritually.

For just a few minutes let’s forget what the world is telling us about manhood and womanhood and step back in time to the Garden of Eden. Let’s see what God had in mind when He invented and created the male and female. Unless we understand what He has to say about our design and role as women, we will be clueless as to what we are truly made to do.

“God created man in His own image, in the image of God He created him; male and female He created them” (Genesis 1:27).

You and I were created in the image of the God of the universe.

As Christians we are created to be a reflection of God to the rest of the world. Yes, there are the basic morals and characteristics we should be displaying in our lives that reflect the beauty and perfection of God; but there are also aspects of God that can only be displayed when womanhood and manhood are lived out in the way that God originally designed.

As you know, Adam was created first and Eve was created second. Everything God did was on purpose and for a purpose. God did not create Eve and then bring Adam to Eve as her helper. No. God Created Adam and then brought Eve to him as a helper suitable for him.

“Then the LORD God said, it is not good that the man should be alone; I will make him a helper fit for him…Then the LORD God made a woman from the rib He had taken out of the man, and He brought her to the man” (Genesis 2:18, 22 ).

All through Scripture we can see this main point emphasized.

One of the lies that our modern culture is feeding us, is that it is discriminating and sexist for the man to be the leader and the woman to be the helper. Somehow we as females have bought into the lie that we are of lesser value if we submit to God by allowing the key men in our life (father or husband) to lead.

Whose idea was this anyways?

Before you get bent out of shape realize that this plan wasn’t some dumb idea that guys came up with. This was God’s idea. God created us in His image to reflect and glorify Himself. That is the reason we as females should strive to live this out. So that we can bring glory to God in the way that He designed us to.

Check out what this college guy had to say:

“I do not believe that one gender is valued more than the other in God’s eyes. However, I also believe that God designed men and women differently to fulfill roles which are unique to them. When people understand and accept their God-given design, they begin to represent the God who made them.” -19 Year Old Guy.

He makes a really great point. We are to represent the God who made us. That is a huge reason why we here on earth. Not for our selfish pursuits, but to represent and bring glory to our Creator.

I love the way Mary Kassian and Nancy Leigh Demoss say it in their book Divine Design.

When we as girls choose to pursue a lifestyle that ultimately reflects God’s original design as a responder and helper to our husbands (or future husbands), it is a radical shock to the rest of the world.

Not to mention God’s ways work.

Following God’s plans for your gender role can make or break your future. If you truly desire God glorifying success in your life, you have to live life according to God’s ideas and not your own.

God created you as a female on purpose and for a purpose. I would highly encourage you to dig deeper into this topic by reading: True Woman 101: Divine Design. Understanding the big picture for gender will give you peace, purpose and direction like you’ve never had before.

I challenge you to take advantage of the opportunity to study the Bible and figure out what God’s original purpose was in creating you as a female. If you haven’t read True Woman 101 I can’t recommend it enough. Understanding God’s purpose for you truly can change your life forever.