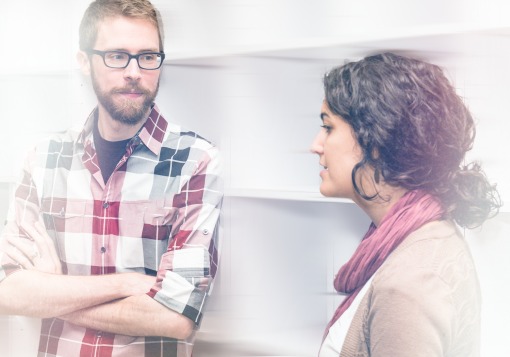 “Do you think there is a difference between chasing a boy and maturely showing interest in one?” -Rachel

This question popped up after we posted a popular article called “When Girls Chase Boys They Don’t Get What They Want.” If you haven’t read it yet, you should! Check it out here, then come back and finish this blog.

Back to Rachel. She asks a great question. I used to wrestle with this question myself. In fact, the conclusion I came to was instrumental during my early relationship with Zack.

Is it possible to maturely initiate interest in a guy?

Well, it depends on what we mean by the word initiate. The dictionary describes the word like this: “cause (a process or action) to begin.”

“Cause a process or action to begin…” Hmmmm, is it possible for a mature Christian woman, with the right motives and a pure heart, to cause an action to begin? Well…yes! In fact, Christian single women can play a key part in helping a godly relationship begin.

There’s a fine line between a girl chasing/pursuing a guy and a girl maturely initiating some action.

I don’t think this is right.

God definitely (without a doubt) calls the man to be the leader and pursuer, but nowhere does he tell the woman to make it hard to be pursued.

Now before I go any further let me make a few things clear.

This article is targeted at godly, mature Christian girls who are of marrying age. If you’re 14, this is great info to learn, but not totally applicable to your season of life yet (just stick with the previous post for now). Also, this post is in direct response to my previous post which explained why girls shouldn’t chase boys.

So, if you shouldn’t chase boys, what can you do to maturely initiate some action? That takes us back to the art of intentional availability.

In the Bible, Ruth was very intentional with her actions towards Boaz (see Ruth 3). Her actions made it very clear that she was interested in something more than a friendship. She “initiated” (caused a process to begin) with Boaz. After she initiated some action, she then stepped back and allowed him to take the lead.

I think we, as mature Christian girls, can do the same thing in the context of our culture today.

When I first met Zack, there was an obvious mutual attraction between us.

Instead of hiding myself away, I made myself intentionally available. This looked like me intentionally seeking out a conversation with him, purposely going to his choir performance, attending a specific Christian conference because he was going, and staying late at a mutual friend’s birthday party simply to chat with him in groups.

I never asked him out. I never verbally told him I was interested. I just made myself available to get to know him. He was a godly guy and I wanted it to be clear that I was open for something more when he was ready.

If Zack had made it obvious to me that he wasn’t interested, I would have stopped making myself available. That’s where “chasing” boys comes into play. Once the guy is obviously disinterested, don’t push the relationship. Don’t lead. Don’t manipulate. Take a step back and give it the Lord.

If you’re a godly single girl of marrying age and don’t have a specific guy in mind, you can still make yourself available.

Marriage is a wonderful institution and a noble thing to prepare for and strive for.

Here are some ideas for you single girls (of marrying age) to make yourself intentionally available. Go to Bible studies where there are godly young men attending. Find Christian conferences where you might meet some godly options. Choose a church where you have the opportunity to fellowship with other single men and women. Serve in a ministry where other mature singles serve. Go on a young adults missions trip. And a gazillion other things.

The options are endless.

The Bible says, “He who finds a wife finds a good thing” (Proverbs 18:22). Yes, the man finds the woman…but the woman doesn’t have to be hiding. *wink*

If you’re a godly young woman with a desire for marriage, I encourage you to find the proper balance. Don’t chase guys down. Don’t manipulate things to get what you want. Don’t pursue guys. Simply make yourself available and leave the results to God.

For an interesting read on this topic, I recommend grabbing a copy of a fascinating book by Candace Watters called Get Married: What Women Can Do to Help it Happen. Find it here.

There’s a lot more I want to say on this topic but I’m out of time. I’d love to hear your thoughts!

Share your thoughts, comments and questions below! I love chatting with you.