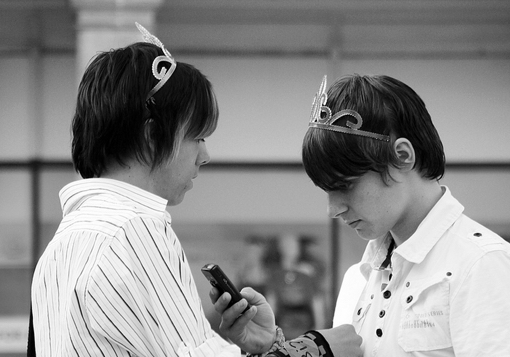 Taylor Swift made a controversial comment about gender at the recent Video Music Awards.

In response to her music video that won video of the year, she stated, “There’s been a lot of discussion about this video and what it means. But I’m just happy that in 2015, we live in a world where boys can play princesses and girls can play soldiers.”

Say hello to the modern world of gender confusion. Taylor’s comments received attention in the media and one popular website responded by saying, “Right on, Taylor.”

Let’s chat about it. What do her statements actually mean? Well, traditionally, the role of a princess has always been played by a female. Right? For me, the word princess instantly brings to mind images of beautiful women in long dresses and sparkling crowns. A princess is a female.

So what was Taylor saying?

Sadly, Taylor isn’t the first person to promote this idea in our society. We live in a culture where gender roles and rules are being pushed far beyond the “traditional” limits.

Obviously Taylor Swift and many others view this as a huge success for society. But is it?

Does it really matter if boys play princesses and girls play soldiers?

Yes. It matters a TON.

Sorry Taylor, but you’re way off on this one. I’m actually sad to say, that in 2015, we live in a world where gender distinctions and values are being completely obliterated.

Here are 3 reasons gender distinctions are vitally important for our world.

The only person who has any authority to say what girls and boys should or shouldn’t be doing is the Designer Himself. God is the mastermind behind the invention of mankind and He had a purpose and plan for His creation.

In Genesis, God clearly created one male and one female. Did He create Adam and Eve to have the same roles and functions? No way. He created the male to be the loving leader, protector and provider, and He created the woman to be the respectful helper, nurturer and life bearer.

It should be an obvious sign that something isn’t working with the rising amount of gender confusion and struggle we’re seeing in our society. Maybe, just maybe, this whole gender liberation movement isn’t actually helping people find their “true” identity. Maybe it’s doing far more damage than good?

Since God is the author and designer of you, me, and Taylor Swift…guess what? He is the One who makes the rules. God designed two genders for a reason and gave us differing, but equally valuable roles to fulfill. If you want a happy, functional, and joy-filled life, you have to embrace God’s design. God’ design is for our own good. When we follow the instruction manual, life makes a whole lot more sense.

True and lasting fulfillment only comes through God’s design.

We all want happiness. We all want fulfillment out of life. We all want purpose. The only true and permanent way to find any of these things is within God’s design. Our lost culture is searching for fulfillment and purpose in all the wrong places. They think they can rewrite the rule book and somehow everything will turn out okay. It won’t. It can’t.

What does this mean for you, today?

As Christian girls, I can’t encourage you enough to base your beliefs about gender on God’s Word. Trust what God says! Believe that His design is for your own good. Obey His Word, even when you don’t feel like it.

We live in a generation that is missing it on vitally important issues. Gender is a huge one. We can’t crumble. We have to stand strong for God’s truth. We have to embrace His design for us as women and show the world how functional and fulfilling God’s ways truly are.

Will you join me in fully embracing our identity as females?

I pray you will! Our generation needs it.

What do you think? Comment below and let me know your thoughts.