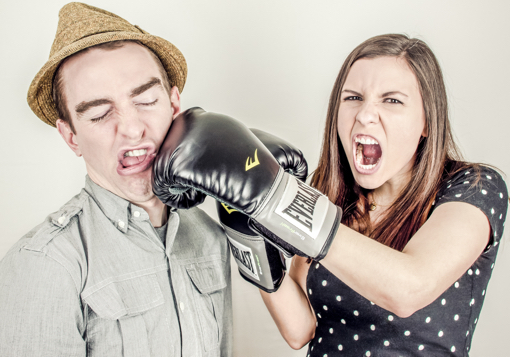 Back in high school, there were two guys who challenged Bethany and me to a game of two-on-two basketball.

Ummm. Yes. We were totally up for the challenge.

You could smell their pride as we stepped onto the court. This was going to be fun.

Lets just say the game didn’t last long. We beat them twenty-one to zip. Bethany and I walked off the court openly smirking.

In our minds, we were the bomb. For us, beating guys in basketball was the ultimate “girls are better than boys” proclamation.

Back then, my attitude towards guys could have been summed up in the words of a popular Nike commercial: “Anything you can do I can do better.”

I loved being better than guys.

I loved competing against them in everything and winning. I didn’t have anything against them…I just liked beating them. Conquering over them. Dominating.

My competitive spirit towards guys wasn’t something unique.

And it stretched far beyond the basketball court.

Most girls today are encouraged take great pride in rising above the male gender. Whether it’s in a sports, academics, work, or hobbies girls are encouraged and applauded when they outdo guys.

There’s an age-old saying that dates back way before my playground days which says, “girls rule and guys drool.” You’ve heard it. That idea might seem cute and innocent on the swing set, but it’s not so pretty later on in life.

We live in a culture that encourages us, as women, to rise above guys in any way we can.

Sadly, that’s a huge aspect of the feminist mindset. Instead of encouraging the two genders to complement one another, we’re encouraged to battle it out against each other.

We call this “the battle of the sexes.”

This battle isn’t new though. It dates back to the beginning of time and originates in the Garden of Eden. The minute sin entered the world, that perfect guy-girl harmony was destroyed forever.

The battle of the sexes was officially established.

Thanks to our lovely sin nature, our natural tendency and desire is to dominate guys. Without even realizing it, I had that exact mindset in high school. Nobody had to teach me to be that way, it just came natural. Add a little encouragement from our culture and -WHAM- let the games begin.

Can you relate to me here?

Thankfully God had a redemptive plan to save us from our sins and to give us a new desire. When Christ died on the cross, He broke us from the chains of sin and gave us the power to conquer our twisted cravings.

As Christian guys and girls, we’re called to love one another, not compete against each other for our identity.

“Do nothing from rivalry or conceit, but in humility count others more significant than yourselves” (Phil. 2:3).

As a Christian woman, if God blesses you with marriage one day, you will be commanded by God to respect, honor, and respond to your husband’s leadership (1 Peter 3:1). There’s no room for aggressive self-focused competition there. Nothing will destroy a marriage quicker than battling against each other in life (I’m talking about more than a simple game of basketball here).

Thankfully, God has helped me mature quite since my high school days. God has been reshaping and challenging my overly competitive and domineering views towards guys.

I no longer have the “need” to be validated and affirmed by beating the male gender.

Now, my goal is to affirm and encourage the men in my life to be great leaders and warriors for the Lord. The real battle isn’t against males, but against our mutual enemy, Satan.

I know some of you probably feel the same way I used to about guys. If so, I’d love to hear about it in the comment section below.

Let’s keep this discussion going in the comment section below. I would love to hear your thoughts on this topic.

To learn more about encouraging the guys in your life, check out these other posts:

3 Ways to Encourage the Guys in Your World

We Need to Stop Destroying Godly Leadership in Guys