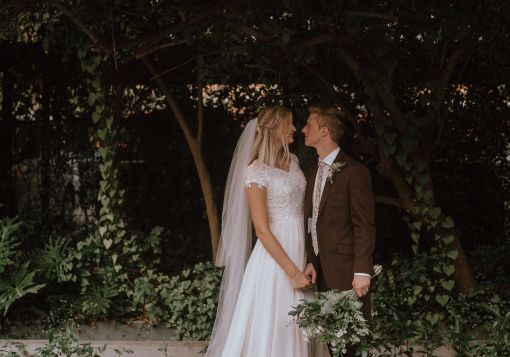 Deep down inside I hoped that this was the day. The day I’d been dreaming of for my entire life. The day I never imagined would ever actually become my reality.

After a beautiful brunch in Fredericksburg, Texas, my boyfriend whisked me off to a classy vineyard filled with gardens and gorgeous flowers. We walked towards the lake in nervous anticipation. There was a quaint little table waiting just for the two of us.

My palms started to sweat and my heart began to race.

I covered my face with my hands and just started to cry.

This was too good to be true. How could this be my life? How could this man be mine? It was too wonderful and too amazing. Through the tears, I said “yes” and Dāv slipped the most beautiful ring I’d ever seen onto my finger.

At that moment I didn’t question whether or not I was ready to get married. I had already thought through that question and decided I was ready to say “yes” and commit the rest of my days to this man kneeling before me.

I’ll often get asked the question, “how did you know that you were ready to get married?”

I wish I could tell you that a banner dropped from heaven with big words written on it telling me I was ready and telling me whom I should marry. That did not happen though. There were no secret signs, no banners in the sky, no audible words from the Lord, or anything like that.

I knew I was ready to get married because a few crucial aspects were in place.

Those 10 different areas gave me the confidence to move forward and say “yes” to marriage. Was I going to be the perfect wife? No way. Would I still have tons more learning to do? Yes!

When I officially got married back in October of 2018, I didn’t’ stop learning. I didn’t stop growing. Instead, I continued to seek wisdom from other married couples. I continued to learn more about my husband. I continued to grow in my character. I just continued doing what I had been doing before.

The learning and growing never stop.

What about you? When you read through my list above, where do you see yourself? Have you been intentional to grow in your relationship with God? Are you working on finding your identity in Christ rather than in a guy?

This list isn’t a magical list and everything I’ve written doesn’t need to be in place in order for someone to get married. These are just a few things that helped me and I’m hoping they will help you. I hope they give some insight into areas that you can dig into. Areas you might need to pay more attention too.

Ultimately your relationship with God is the most crucial aspect of marriage preparedness.

I once heard that a good marriage is like a triangle. God is the top point and the husband and wife are each the side points. The more each of you goes toward God, the closer you get to each other. Focusing on your relationship with God is something you should be doing for the rest of your life. Starting that right now would be the best marriage preparation in the world.

I’d love to hear from you now.

What do you think needs to be in place for someone to get married? If you’re married, how did you know you were ready?