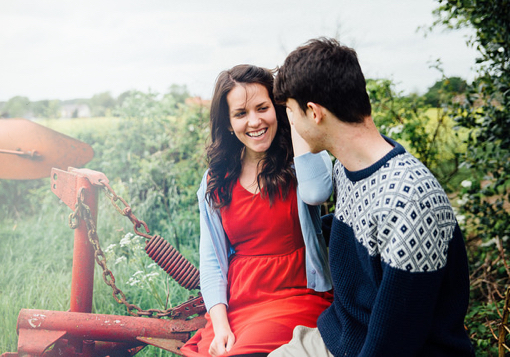 I heard a story recently about a single mom who was fiercely feminist and didn’t want her son being stereotyped. Stereotyped for what? Well…for being a man.

She didn’t believe in gender differences so she did everything she could to zap his manliness.

She encouraged him to play with dolls, wear dresses, and sit with his legs crossed.

She never allowed him to play with toy guns or anything that appeared masculine.

She thought she was doing a pretty good job of guarding him from any forms of gender stereotyping until one dreadful morning. While scrambling eggs for breakfast, she looked over, and to her shock, her four year old son had chewed his piece of toast into the shape of a gun.

Boys will be boys, I guess.

God created guys and girls to be different and it’s a beautiful thing. We are not the same and that should affect us in positive ways. Instead of stifling our unique differences and fighting to be the same, let’s embrace God’s design for our womanhood and thrive as He intended.

Check out this list of 20 differences between guys and girls.

While reading, just keep in mind that this list is about the majority, not every instance. Yes, some guys do ballet and some girls play football; but is that the majority? No. That’s what I mean.

1. Guys and girls have completely different chromosomal patterns which means we are totally different on a cellular level.

Studies have shown how this difference plays out in everything from how we carry books differently, to how we sit, to how we talk with our hands.

2. Guys gain their fat in the belly while girls gain fat in the rear and thighs.

And yes, girls get more cellulite than guys. However, this annoying fat actually reflects something beautiful about our design. God designed us to store fat more easily than guys for the purpose of preparing our body to nourish a pregnancy!

3. Guys are typically 10% larger than girls.

Why? Because God designed the male to be the leader, provider and protector. This points back to Genesis 2 where God created Adam first and assigned him the task of caring for, managing, and working in the Garden.

Guys are typically 50% stronger than girls in brute strength. God created men with larger muscles! When used for good, guys are the perfect candidates for protecting their families, fighting for their country and offering a strong hand whenever needed.

It’s kind of sad, but true. Just visit any nursing home and you will see lots of old grannies and very few grandpas. Maybe God did this because women are designed to be nurturers…and this way, we can nurture our dying husbands. Who knows!

This gives a guys a masculine and strong look while girls tend to look softer, smoother, and more feminine.

8. Girls have a womb and are able to get pregnant.

This is HUGE!! This is an amazing unique quality that girls possess and shouldn’t be brushed aside. God gave the female the gift of bearing new life. This speaks to why women are naturally more nurturing, loving, gentle, sensitive, and relational.

Since red cells supply oxygen to the entire body, girls tend to get tired more easily. Guys are designed to be strong and enduring.

Since God designed guys to strong protectors, it only makes sense that they would need larger lungs to help sustain their energy during battles and wars.

Just look at the way teen girls flock to the bathrooms together. You’d be hard pressed to see a group of teen guys doing that.

12. Girls like to take the conversation to a heart level.

On average, we like getting to the “feelings and emotions” stage quicker than guys. Why? We’re designed to be super nurturing and relational.

13. Girls text long messages and include loads of emoticons. Guys…not so much.

This is just another sign of our feminine design to nurture and care for relationships.

Girls tend to get teary-eyed more quickly than guys.

Arms around each other, linked arms, crying on each others’ shoulders…girls are relational, and our physical touch proves that.

16. Guys tend to be visually stimulated more than girls.

This becomes more relevant as they enter into adulthood. Why do you think there are so many jokes about dads wanting to watch football in their man caves? God created guys to be fighters and competitors. That is why guys are so attracted to sports.

18. Girls thrive on romance while guys don’t care as much.

Girls love romance because we love being nurtured and cared for. We love the idea of our strong man being gentle and sweet to show us he cares.

19. Girls flock to chick flicks while guys opt for the action movies.

Stats show that 71% of Pinterest users are females. Why? Because God created girls to be natural nurturers of relationships and our home. Home decorating, DIY’s, and food recipes are amongst the most popular boards.

Guys and girls are undoubtedly different. Your gender matters. God created you to be a female for a specific reason. It wasn’t an accident. Understanding more about your design as female will radically change the way you live.

I challenge you to learn more about your God-given design as a girl by reading some of the following books:

Let Me Be a Woman

Also, check out these other Girl Defined blog posts:

What is the Purpose of Being a Girl?

5 Reasons Why I Love Being a Girl

Your Womanhood is Not About You